When Ryan Kerrigan officially became a free agent in March, the writing was on the wall for Washington’s all-time sack leader continuing his career elsewhere.

Though many fans held out hope that the veteran edge rusher, who has been in DC since being drafted 16th overall in the 2011 draft, would eventually be brought back, it no longer looks like that is a possibility after Kerrigan posted a thank you on his Instagram late last night. 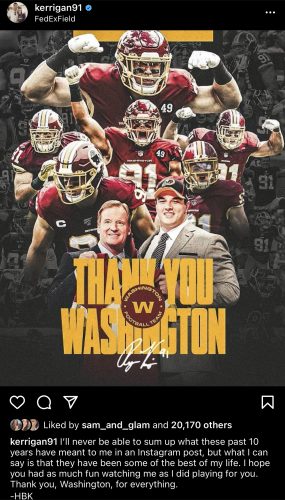 Since entering the league in 2011, Ryan Kerrigan has the 5th most sacks in the NFL and the 7th most tackles for losses. His 95.5 total sacks are the most ever in Washington Franchise history.

Longtime local radio host Al Galdi wrote, “A salute to Ryan Kerrigan. In a time in which way too many #WashingtonFootball players were malcontents, oft-injured & just not that good, he never complained, was incredibly durable & was highly productive.”

While his career in Washington has come to an end, Kerrigan has not given any indication that he will not be playing football next year. He had 5.5 sacks as a situational pass rusher for the NFC East winning Washington Football Team last season.

Be Your Best Fest in Gaithersburg Saturday, May 22

Virginia Declares State of Emergency in Advance of...