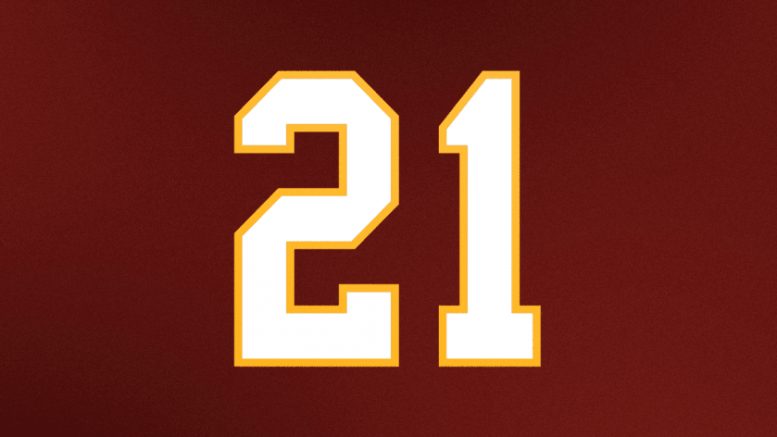 Team President Jason Wright offered an apology to fans on Thursday, acknowledging  “screwing up the execution” of the event. The statement can be seen here.

Below is more information on today’s tribute, courtesy of the Washington Football Team.

During the Washington Football Team’s October 17th matchup against the Kansas City Chiefs, the team will honor nearly 100 alumni at FedExField, while also paying a special tribute to Washington alumnus and football legend, Sean Taylor. Taylor’s family will join the team on-field for a pre-game ceremony in which Taylor’s contributions to the team will be remembered alongside the retirement of his jersey number, 21. This will mark only the third time in the team’s 89-year history that a jersey number will be officially retired.

The team also will formally commemorate the renaming of the road leading to FedExField as Sean Taylor Road with family and friends of Taylor before the game. Sean Taylor’s family will have the opportunity for a private visit at Taylor’s locker on the Club Level, which has been perfectly preserved from his last game, and will enjoy the game from specially reserved suites. Co-owners Dan and Tanya Snyder were especially close with Taylor and view him as an important part of the team’s legacy. They have remained supportive of his family over the years and will be helping to host the family during the game.

Taylor played for Washington during all four seasons of his NFL career. After being selected with the 5th overall and first Washington Football Team pick in the 2004 NFL Draft, Taylor established himself as one of the top young safeties in the league and a fan favorite. Following a successful rookie year, Taylor started 15 games and led Washington to its first playoff win in six years. By 2006, Taylor was one of the premier defenders in the NFL. Then, tragically on Nov. 27, 2007, Sean Taylor’s life was cut short after being shot during a robbery attempt on his Florida home. Posthumously, Taylor was honored by the NFL and named a 2nd team All-Pro selection in 2007. The following year, Washington announced he would be inducted as only the 43rd member of the Washington Ring of Fame.

“I came into the NFL the same year as Sean Taylor and immediately his athletic ability, resilience, grit, and relentless work ethic set him apart. I and many others looked to him as a role model,” said Jason Wright, Washington Football Team President. “The fact that he was tragically taken so early hurt our player community, but also our fans, coaches, and staff. We will continue to remember him and hold him up as an example of professionalism and excellence, and we will all strive to mirror his excellence in our own ways.”

Maryland Up to 107 Confirmed Cases Including 5 Year Old Girl