It took a while for the changeover from rain to snow to occur for most parts of MoCo, so it looks like totals will likely be on the lower half of what was projected by most outlets and probably lower than the 4-6” map the NWS had out prior to the storm…at least for the areas that were changed to advisories.

The latest map from the NWS has almost all of MoCo in the 2-3” range. 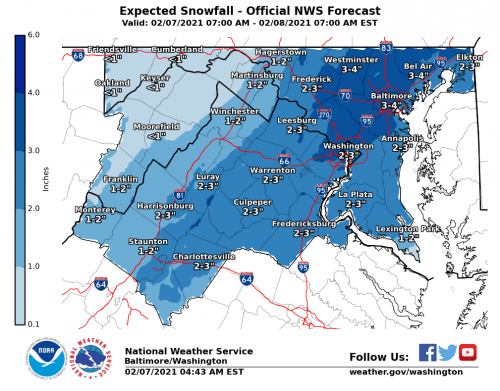 It’s messy out there right now and likely will be for a while before things improve and then take a slight turn for the worse as temps drop into the teens overnight.

What about the Wed-Sat system? That looks very promising, the Arctic Air will settle over the Mid-Atlantic giving us cold temps and we could have two systems coming by dropping snow! (Latest UKMET and ECMWF runs giving us around 8-11″)