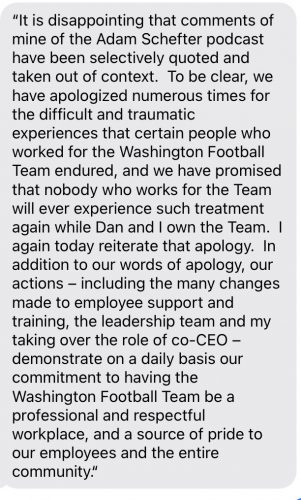 In her statement, she references comments that were selectively quoted out of context regarding recent issues within the organization.

The appearance by Tanya Snyder on NFL insider Adam Schefter’s podcast also led to some confusion regarding the new name of the team earlier in the week.

During her appearance, it seemed as though Snyder announced the 8 remaining names in contention for the Washington Football Team’s new nickname.

This came a couple weeks after Team President Jason Wright announced that the team had narrowed it down to 3 potential names.

The day after the podcast Adam Schefter tweeted clarification on Tanya Snyder’s comments, stating that a Washington Football Team spokesperson said the list of eight names she mentioned were a selection of names that were highlighted in the WFT’s Making the Brand Video, and not a final list of potential name candidates.

Ichiban Restaurant in Gaithersburg to Close After Over 35 Years in Business on Sunday, September 12

Beyond MoCo: Officers On Scene For Shots Fired...