The second Love The Music Record Show in Silver Spring went without incident, as many record hunters throughout the Washington, D.C. area filled the room where dealers advertised both newer and older releases.

Like the first event in October, the second Love The Music Record Show was held at Rosensteel Hall on Dec. 4, with many dealers set up both inside and outside the Emerald Room. Rick Mulvihill founded and organized the event as a way for music lovers to gather together after an absence of local record shows caused by the COVID-19 pandemic. 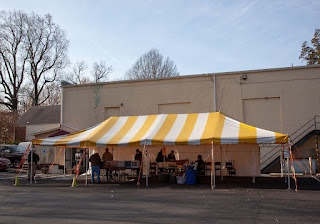 After the first Love The Music Record Show, Mulvihill took time to adapt some of the advice he received to prepare for the next event.

“I got a lot of feedback from the [first] event regarding promotion,” he said. “I incorporated those [comments] and did a lot more promotion through Facebook, some of the newspapers and other media that’s available to me.”

Mulvihill said that advertising the event brought the number of dealers from 16 to 25.

In the weeks leading up to the event, Mulvihill teased on his blog some of the new and returning dealers that would make an appearance. Russell Katz, owner of The Vinyl Revivers in Simpsonville, was one of the new dealers mentioned. At the event, he showcased a record cleaning machine as well as many newly-distributed records for sale. 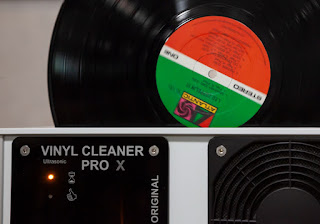 “It’s just great seeing people interested in vinyl [records],” Katz said, as he pointed out the format’s resurgence in popularity over the past few years. “Vinyl just really makes you listen to music, [and] it forces you to sit and actually push aside all the distractions and actually just enjoy what you’re listening to.”

Mulvihill also introduced Luke-Aubry, an independent record dealer based in Richmond, Virginia. On his blog, Mulvihill wrote about how Luke-Aubry regularly travels along the east coast to search for records of unique music genres and also provides records to DJs and producers for sampling in their projects.

“It’s fun to see what kinds of people show up [at the event],” Luke-Aubry said. “Everybody’s into different kinds of music, but we all come together for the love of the same format. 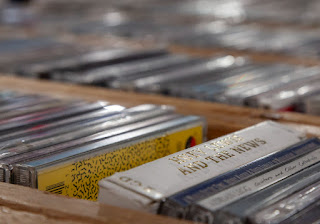 The advertising also helped to bring in droves of new shoppers, as well as those who returned for a second helping of records. Some shoppers were more famous in certain scenes, such as one who identified themselves as “Skull,” the lead singer of a doom metal band known as Black Manta.

“You’re just supporting the scene [by] coming out and being amongst people [who] are also into music and collecting records,” Skull said, as he described the atmosphere of the event. “We’re social animals.”

The Love The Music Record Show helped to bring people of all ages together over a love of music for a second time. Despite growing concern for the omicron variant of the coronavirus, Mulvihill said he wasn’t too worried about it affecting the event.

“We really need to just get on with our lives and do the things that we love to do, regardless of COVID,” he said.

Mulvihill has planned for the next Love the Music Record Show to occur on Jan. 29, with a focus on improving the customer experience.