The National Weather Service still has half of MoCo in the moderate winter storm threat category and the other half in the enhanced category for a potential storm on Sunday into Monday.

Here’s what we know, so far. Cold air will be in place as temperatures on Saturday will reach a high in the mid 20s and drop into the teens early Sunday morning with highs in the mid to high 20s.

As it looks right now, we should see a “front end thump” of snow. The snow, which will likely be heavy at times, could start fall in our area in the afternoon/evening hours and continue into the night.

This is where things get complicated…

The track of the low can take it right over/near us, which is how things look now. If that happens, we start as snow and changeover to a mix before likely going to all rain (possibly changing back to a mix or snow before it’s all said and done).

If it nudges East a bit, we could see more of a snow storm that would increase our totals.

If it moves west, we likely see cold rain.

So far both the Euro (European model) and GFS (American model) show us starting with snow and changing over to a mix before moving to all rain. The recent runs of both models have nudged East just a little bit. If things can move 50/100 miles to the east, we’re in business for a major snow storm.

As of now, here are some of the model outputs in this tweet from the Capital Weather Gang

Here's how much snow the major models are showing (except the UKMet which shows 2-3"); note that these amounts may be a bit overdone since models count sleet (which holds back accumulation) as snow. pic.twitter.com/XVJioE5uM0

The Canadian model, shows barely any snow. The GFS shows 5-6 inches for MoCo and the Euro shows 5-7 inches for MoCo. As the tweet mentions, this likely includes sleet, which makes the totals look like more than what they’ll actually be. It’s also important to remember that this will likely be followed by rain to wash away most of what we got.

We will continue to monitor this storm and provide you with updates. 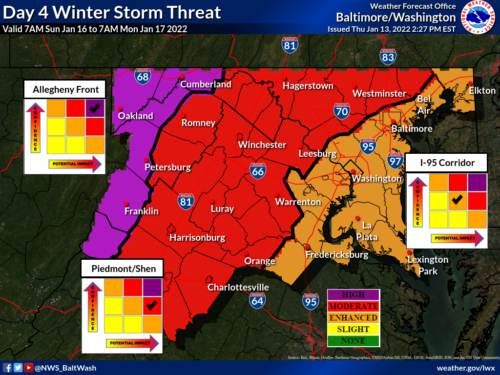