Rain is expected to develop overnight and change to a very brief period of sleet before the changeover to snow around 5am on Thursday morning. It should snow for a few hours, leaving anywhere between a coating to 3 inches of snow.

In the latest maps from the National Weather Service, they are still expecting less than an inch for most of the area, but have raised the “reasonable worst case scenario” totals to 2-4 inches for MoCo. 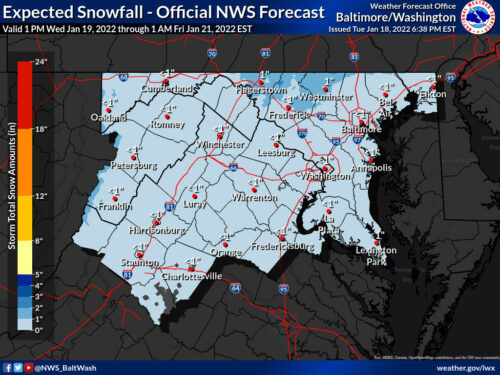 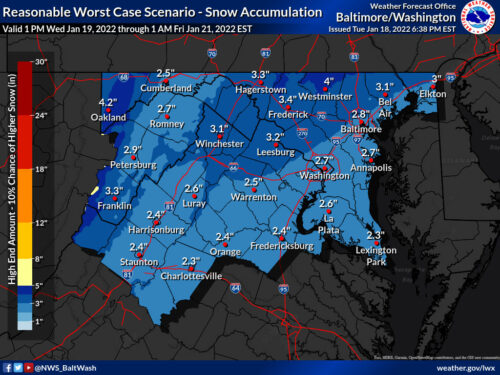 Tomorrow should provide more clarity for this system as we get a better idea on how disruptive it will be to the Thursday morning commute.

We continue to monitor the Friday night into Saturday storm, but even the Euro has moved southeast and further away from the higher snow totals it was showing yesterday. The GFS remains off-shore, so we’ll have to see if either model brings it back this way.

“An Arctic front will push into the region Wednesday night, crossing the region Thursday morning. Initially, temperatures should be warm enough to support rain across most of the lower elevations. However, much of the atmosphere will not be far from freezing. Colder air behind the front, with a coupled mid/upper jet should set the stage for anafrontal precipitation (where precipitation is along and behind the front, in this case in the colder air). Frontogenesis in the low levels combined with the jet aloft may result in an enhanced area of rain changing to snow during the Thursday morning commute. A coating to an inch of snow is most likely, especially on grassy surfaces given the milder temperatures initially, but a few inches are possible beneath any such band that develops.”