You might have seen cider from Two Story Chimney at the Silver Spring, Bethesda, or Olney farmers markets– they’ve been making and selling their cider since 2019. Although a specific date has not been confirmed yet, they shared with us that they are planning to open a tasting room this August. The tasting room will be in the Agricultural Reserve between Damascus and Laytonsville.

Two Story Chimney’s name comes from the historic property that the cidery is built on. Although there is an apple orchard on the premises now, this land was originally used as a tobacco farm. There was a two story tobacco barn (built in 1847) that had a chimney with one hearth on each floor. The tobacco barn itself is long gone, but the two hearths are still standing on their own.

The two story chimney is not the only historic part of the property– there are two apple trees from the early 1900s that are still growing. Two Story Chimney makes their cider using a combination of fruits from grafts from these historic apple trees, fruits from modern trees grown on site, as well as from fruits grown in other local orchards.

Recently, Governor Hogan and his staff made a visit to Two Story Chimney. 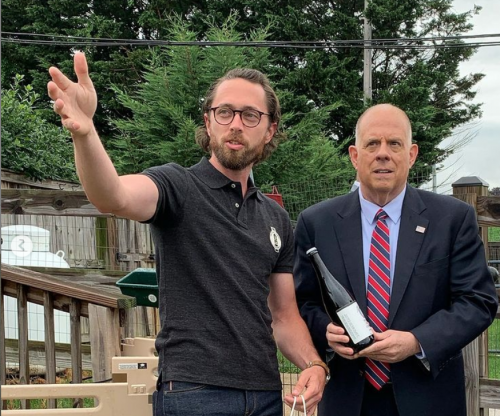 You can learn more about Two Story Chimney Ciderworks here.