Update on Building Fire and Explosion in Gaithersburg

Montgomery County Fire and Rescue Chief Scott Goldstein provided the following update on this mornings explosion and building fire in the Potomac Oaks apartments in the 800 block of Quince Orchard Blvd in Gaithersburg. 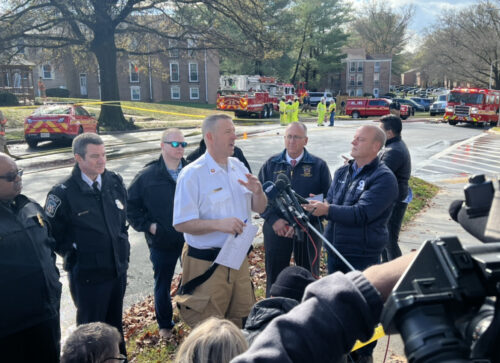 -Initial calls to 911 came in at 8:40 for a fire/explosion at building 826.
-Ten people have been transported to the hospital, two with critical injuries and eight (4 adults/4 children) with mild/moderate injuries. No children sustained critical injuries. Two individuals were treated on the scene and refused transport.
-No active rescues currently going on as the building is not safe for rescue personnel to go in.
-Several residents are still unaccounted for (they could be at work).
-Residents from 24 units across four buildings have been displaced
-A maintenance worker on site rescued residents with a ladder prior to MCFRS’ arrival.
-Residents report smelling gas prior to explosion
-Nearby Brown Elementary School is working on a dismissal plan. The school was not affected by the fire/explosion.
-MCFRS will provide the next update at 2pm.

MCFRS Respond to Building Fire and Explosion in Gaithersburg