UPDATE: These mailboxes have been gathered in this area for a while, according to a Google Maps image. 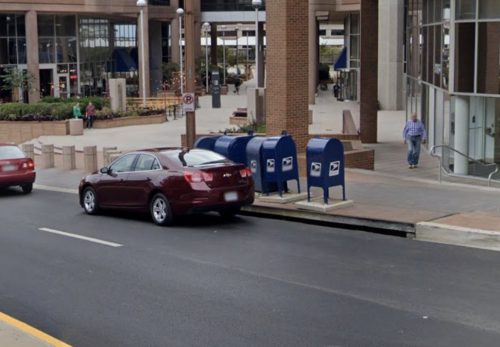 Someone appears to have gathered USPS blue collection boxes/mail receptacles in Downtown Silver Spring, according to a tweet shared with us this morning.

The reason for what looks like a half dozen receptacles gathered into one spot is currently unknown, but a recent CNN article states that “the removal, and installation, of the almost 142,000 letter collection boxes nationwide was routine, and “has been based on mail volume received in those boxes.”

According to the article, the USPS will stop the removal of letter collection boxes in 16 western states and parts of two others until after the election.

It is unclear if the freeze will occur in other states as well. 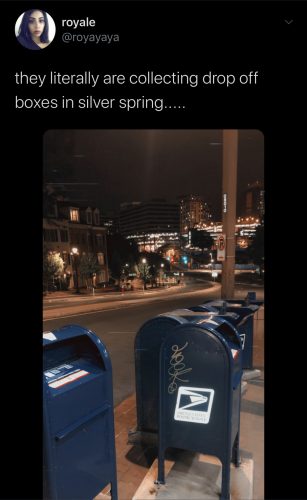 Humane Society Will Distribute Pet Food to Those in Need

I believe you’re referring to the founder of The MoCoShow, who is a P.E. teacher. He can be heard as a contributor on The MoCoShow podcast.

This was an update on the mail receptacles gathered in Silver Spring that includes information From the USPS that comes from a recent CNN article.

There’s no mention of politics, but we do cover local happenings that may have political implications. Lucky for you, we don’t report with any bias, so you’re able to form your own opinions.

A few things:
1. Five mailboxes. I walked by yesterday and counted them.
2. There has always (in my 15+ years living in Silver Spring) been that many boxes at that spot.

Thank you for your update and for not placing blame on our president in the initial report. That is honest reporting

Dumb… those mailboxes have been grouped there since i’ve lived in the area (5yrs).

This is Kg again….I’m by no means a trumper… but, this story is false and it skews the usps issue. If you really want to see good information (and entertaining, too), check out the exposé from John Oliver on LastWeekTonight for USPS and Mail-in Ballots… he actually did his research, unlike this embarrassing article.

I don’t know if u reading the same thing as me but it literally says the post office always does this so it shows that it’s not the post office n trump issue. Unless im missin something?

The update was a good move even though you didn’t say anything about Trump. People who love him got mad and people who hate him got behind a conspiracy theory. No winning either way for you all, but thanks for reporting it and updating it.

I think the Trumpers don’t realize you all explained why the the blue mailboxes were collected in a way that wouldn’t suggest voter fraud.