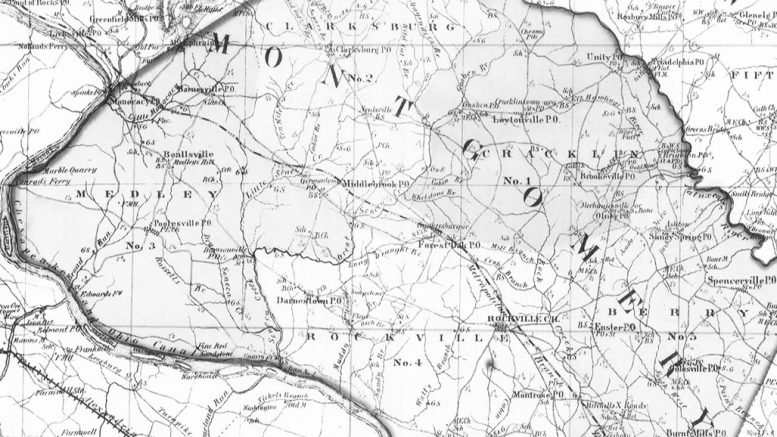 What Current Areas in MoCo Used to be Called (part 1)

While some have had the same name for hundreds of years, many of the areas we know and love in Montgomery County weren’t always known by the names they have now.

Many had similar names, others had very different names, and plenty were part of a different area before they became their own place.

Let’s look at a few below:

In the early 1890s, Washington, D.C. developer Brainard Warner began purchasing land parcels to build a planned Victorian community– he named his subdivision Kensington Park. The 10th and largest subdivision in the area became the Town of Kensington and incorporated in 1894.

Montgomery County used to be divided into districts– one of them known as Cracklin. The name originated from the popular cracklin bread, which was baked in the area. Laytonsville was incorporated in 1892.

A small settlement grew around a store and tollhouse along the turnpike by 1862 known as “Darcy’s Store”, named after the store’s owner William E. Darcy. The settlement was renamed in 1871 by postmaster Robert Franck after the Bethesda Meeting House, a Presbyterian church built in 1820 (per Montgomery County: Centuries of Change).

The community of Burtonsville, originally called Burton’s, takes its name from Isaac Burton, who in 1825 bought out his siblings’ shares of his father’s land and became the major landowner in the area. He and his wife Keturah had 17 children, many of whom stayed in the area as adults (per Montgomery County: Centuries of Change).

Clarksburg is named for trader John Clarke. Before that name was given, back in 1752, a man named Michael Ashford Dowden received a patent for 40 acres from the colonial government called “Hammer Hill.” Later on, Clarke’s grandson Jamie built a general store in the area and enough people moved in that he was named Postmaster for the community.

Signage is Up at New Kentlands Starbucks

ArcLight Theater in Montgomery Mall Will Not Reopen