Whitman Girls’ Soccer (14-2-1) has outscored opponents 55-2 since losing to Walter Johnson back in early October.

The team defeated Parkdale 13-0 in the State Quarterfinals before going on to beat fellow MCPS school Sherwood 8-0 in the Semifinals.

Last night Whitman played undefeated Broadneck (17-0-1), who squeaked past Quince Orchard 1-0 in the Semifinals, and won the State Championship by defeating them 2-1.

This is the the program’s first state championship since 2014 and fourth overall.

The team’s roster can be seen below: 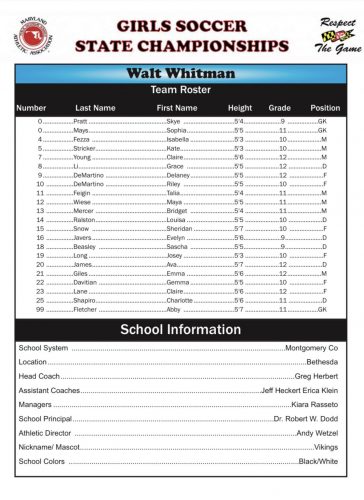 Two MoCo Natives Prepare to Suit Up for...

Five With Strong MoCo Ties to Participate in...