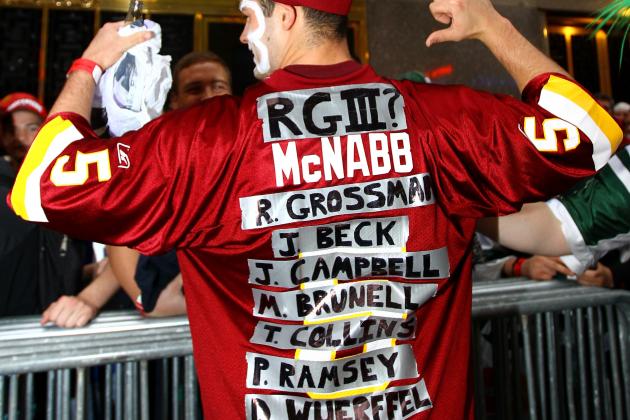 The Redskins are 4-3-1 halfway through the 2016 season. If the playoffs were to start today, the Redskins would sneak in as the 6th seed in the NFC. Kirk Cousins has been the Redskins starter for a season and a half now.  After failing to agree to terms on a long-term extension this off-season, he was franchise tagged and is earning just under 20 million this season (in his first 4 years with the team, he earned a combined 2.5 million).

With all of that said, I would say the fan base is pretty evenly split on if the Redskins should sign Kirk Cousins to a long term contract potentially worth around 20 million annually. Luckily, the actual decision doesn’t have to be made until after this season has ended, which should give us and the front office a clearer look at whether or not we should pull the trigger on the huge contract.

So here are some possibilities as to who will be under center for the Redskins in 2017:

Kirk Cousins. Unless there is some kind of dramatic drop off in his play, he is most likely to return as the starter.

– He seems to be improving a little bit each week with the “wtf was that?” plays making much less frequent appearances.

…and has been better than all of them for the last 20 games (there are better QB’s making less, but they signed their deals when the market value for QB’s was much lower). What he brings to the table may not be worth 20 million dollars, but if he doesn’t get it here he will probably get it elsewhere (most likely wherever Kyle Shanahan gets a head coaching gig).

2017 Rookie QB. The Redskins may spend one of their top 4 picks on a QB and bring him in to run Jay Gruden’s offense. While there may be a bit of a drop-off initially, it’s tough to imagine that a good rookie quarterback can’t be molded into someone that can find similar success to what Kirk has had.

Teddy Bridgewater. He may not be ready to go at the start of 2017, but there are already rumblings that the Vikings will be Sam Bradford’s team moving forward even if he is. Bridgewater is under contract for just over 2 million next year (the last year of his rookie contract) and the Vikings may want to move him and get something in return rather than letting him walk after the 2017 season. If it looks like he can play at a high level following his gruesome injury, the Redskins may look into sending a mid-round pick to Minnesota and signing Bridgewater long-term for a significantly less amount than Cousins would command.

Colt McCoy. There are lots of people making the argument that the Redskins would have the exact same record if McCoy was under center this year and it’s hard to believe that they wouldn’t at least be close to it. McCoy is not a long term option, but he may be good enough with the weapons this team has and a defense that should improve through next year’s draft. McCoy is under contract for 3.6 million per year in 2017 AND 2018.

Jay Cutler. ​Even with a win in his return to the Bears last week, it’s time for Chicago and Cutler to go their separate ways. Cutler was once considered one of the better quarterbacks in the league and I don’t doubt that he can find success in the right situation. He will count for 16 million against the cap in 2017 and 17 million in 2018 (both years almost 5 million less than Kirk would cost). If he was to come to Washington and things didn’t work out after a year, there would only be a one million dollar cap hit if he was to be released following the season.

Nate Sudfeld. Sudfeld played well this preseason and the Redskins were forced to keep him on the active roster to avoid another team taking him away. Is he capable of starting in the NFL? He may get a chance to compete next season if Cousins isn’t back…so we might find out.

Tony Romo. This has the least chance of occurring, but imagine how crazy it would be if it did. Romo is under contract for about 25 million per year for the next two years (he’s under contract for 23.7 million in 2019, but can be released with a cap hit of only 3.2 million). That’s more than Kirk would cost, but a healthy Romo is significantly better than Kirk Cousins. Unfortunately, Romo is rarely healthy. If he’s willing to restructure in order to facilitate a trade

Be the first to comment on "Who Will Start At Quarterback For The Redskins In 2017?"