A winter weather advisory is in effect for MoCo from 1pm Sunday until 1am Monday morning. The advisory calls for 1-3 inches of snow followed by ice accumulations of up to one tenth of an inch.

The timeline remains, with snow expected to start for our area in the afternoon before switching over to sleet and freezing rain later in the evening and finally changing to all rain on Sunday night.

The latest maps from the National Weather Service shows about 2-3” of snow for MoCo and a little less ice than the previous map, with totals between a hundredth of an inch and a tenth of an inch. 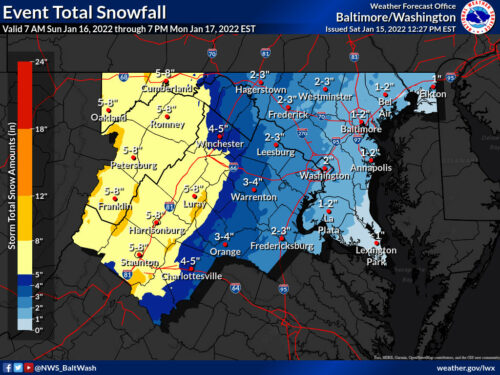 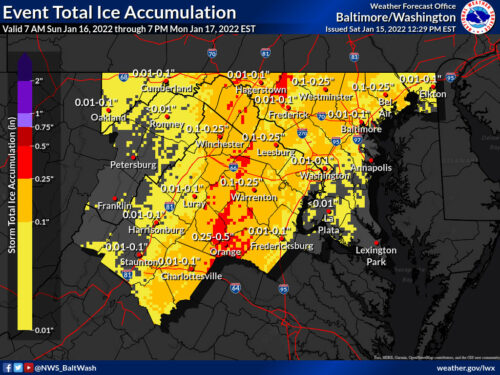 Roads will get slick soon after the snow starts to fall due to the cold temperatures today and early tomorrow. They’ll get worse once the sleet and freezing rain begins to fall in the evening and could stay relatively messy into early Monday morning before the rain eventually washes everything out.

Per the National Weather Service:

* IMPACTS…Plan on slippery road conditions. The hazardous conditions could impact the morning commute.

Slow down and use caution while traveling.

When venturing outside, watch your first few steps taken on steps, sidewalks, and driveways, which could be icy and slippery, increasing your risk of a fall and injury.

We’ll have an update for you tonight.