A Winter Weather Advisory has been issued for SE Montgomery County from 4pm today until 4am tomorrow.

Per the National Weather Service:

* WHERE…The District of Columbia, and portions of central
Maryland and central and northern Virginia.

* WHEN…From 4 PM this afternoon to 4 AM EST Saturday.

* IMPACTS…Plan on slippery road conditions. The hazardous
conditions could impact the evening commute.

Slow down and use caution while traveling. When venturing outside, watch your first few steps taken on steps, sidewalks, and driveways, which could be icy and slippery, increasing your risk of a fall and injury.

Highs today will reach the mid to upper 30s. While we may see some scattered showers throughout the day (nothing major), snow isn’t expected to start until about 4 or 5pm. Initially this will likely only provide a dusting on the grass until the sun goes down and that’s when road conditions could deteriorate.

The National Weather Service map from early this morning has MoCo in the 1-2” range for this storm, so not too much is expected. 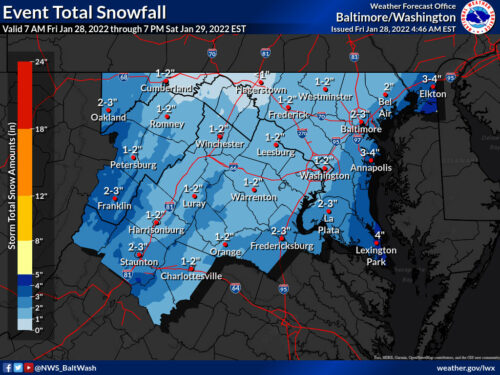 As seen in the tweet below by Fox 5’s Mike Thomas, a general 1-3 is expected (like the advisory states), but there are still “boom” and “bust” possibilities.

How much snow? Minor adjustments to yesterday's map, but generally holding steady with risk of 1-3" around DC. Not a major snow, but things could get slick this evening. For "boom" potential, this morning's NAM brought 6" to DC, while a "bust" would be the HRRR's Trace-2" totals. pic.twitter.com/7OWOQfB1Pp

Prince George’s County, which is expecting more snow than us, announced last night that schools will be closing early today due to the weather coming this afternoon.

While it’s possible for us, it’s not likely as heavier snow that would stick to the roads wouldn’t fall until later this evening. There’s a better chance of after school activities being canceled.

Either way, if snow is falling we recommend to use extra caution while driving.

Winter Weather Advisory Now In Effect for All...