WWE Superstar, Omos, Surprises His Family in Nigeria for the First Time in 14 Years (He Moved to the United States in 2008 to Attend High School in MoCo)

WWE Superstar Omos came off one of the biggest matches of his career at WWE’s pay per view “Crown Jewel” event in Saudi Arabia. Though he didn’t come away victorious, he did get to visit his family in Nigeria for the first time since moving to the United States to attend school and play basketball at Montrose Christian in Rockville back in 2008.

The 7’3, 335 Nigerian-born Jordan Omogbehin moved to America with his family and attended school/played basketball at Montrose Christian (photo below) for the 2008/2009 and 2009/2010 school years. He went on to attend and play for the University of South Florida before moving back to Maryland and attending/playing for Morgan State University. His college basketball career spanned from 2012 to 2015. Omogbehin signed with WWE in October 2018, and made his in-ring debut a couple years back at WrestleMania 37 in Tampa, FL. From the time he initially came to the United States, he hasn’t been able to make it back to visit his family until last week. The video, seen below and courtesy of TMZ Sports, is certainly a feel-good moment.

Omos won’t have a shortage of people to talk MoCo with in the WWE. Shane McMahon, the son of former WWE chairman and current owner Vince McMahon, was born in Gaithersburg. The McMahons (Vince, his wife Linda, and Shane) even lived in Montgomery Village for about a decade, and the home they owned was sold a couple years back. 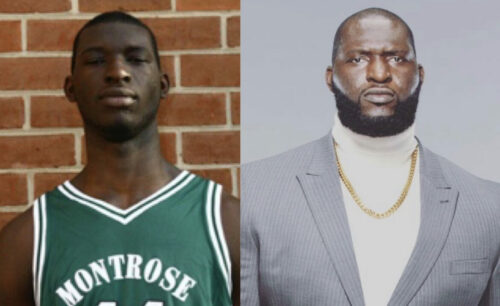 Beyond MoCo: Bojangles is Coming to Frederick