The 3,200 SF building that was formerly home to Capital One bank at 9761 Traville Gateway Drive is being marketed as a potential site for a standalone restaurant, according to the brochure for leasing at the shopping center. The bank opened in February of 2003 and closed a few years back. The building has remained vacant ever since. According to renderings (seen below) for what the building would look like after a restaurant moves in, there is space for a patio with plenty of outdoor seating and the bank columns would remain.

Anyone interested in opening a restaurant at a slightly bigger location, that previously housed a restaurant and wouldn’t require as much work, could look a few feet away at 9755 Traville Gateway Drive- the 4,840 SF building that was previously home to Nantucket’s Reef.  Potential tenants would be able to join longer tenured restaurant tenants like Bageltowne Deli, Cava Mezze, and Potomac Pizza, or restaurants that are newer to the neighborhood like BB.Q Chicken and Klay Healthy Indian Eats. 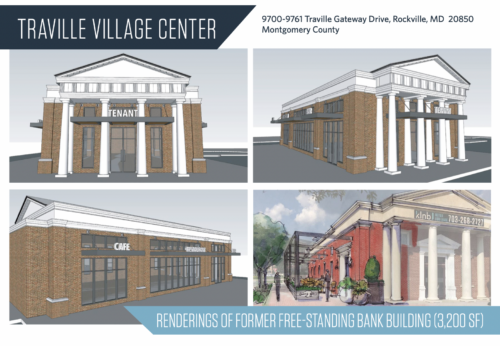 Governor Hogan Proclaims Freedom of the Press Day In Maryland