'
Local Blues Icon Warner Williams Has Died
Warner Williams has passed away at the age of 91.  Williams, who was born in Takoma Park, often performed alongside Jay Summerour and Eric Selvy as Little Bit A Blues. Warner played at venues throughout Montgomery County and beyond, and would often stop by local open-mic nights at area bars and restaurants.
The band made the announcement this morning on their Facebook page: 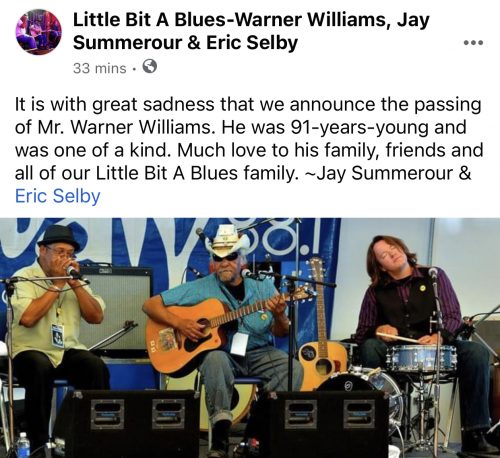 Williams was a recipient of a 2011 National Heritage Fellowship awarded by the National Endowment for the Arts, which is the United States government’s highest honor in the folk and traditional arts.

According to their bio, Little Bit of Blues were known for playing in the “Piedmont blues style, a regional variant of the blues that developed in North Carolina, South Carolina, Virginia, Maryland and West Virginia.”

Mr. Williams it was an honor to have known you and played shows alongside of your greatness, now you go on your trip and when you get there show them how it’s done, blessings to the Williams family.