In a time when many Americans were forcefully isolated by COVID-19, the Love the Music (LtM) Record Show brought local music lovers together for the purpose of buying, selling and trading records and other items.

The inaugural LtM event was held at Rosensteel Hall in Silver Spring on October 2, with vendors lined up both inside and outside of the building, including record store owners and representatives, independent vendors as well as collectors. The event was sponsored by Rick Mulvihill of Kensington, who wanted a way of uniting record shoppers during COVID-19.

Mulvihill originally retired from his job in July of 2020 and needed a way of restructuring his life. He wondered how he could get more involved in the music community, as he has a collection of music himself, particularly vinyl records featuring various genres and artists. 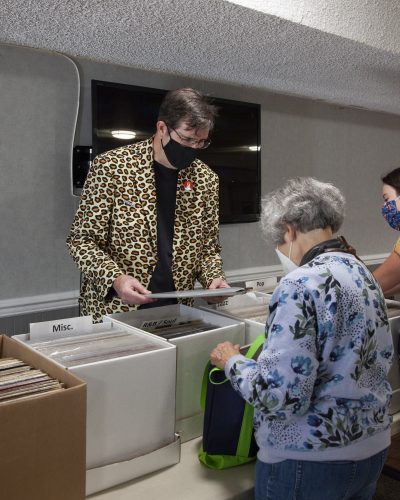 “I wanted to start rebuilding some of those connections and bridges between people and music, particularly because music is such a big influence and touches people so closely,” Mulvihill said.

As COVID-19 forced many local record stores to reduce staff, with some stores switching to online-only sales, a majority of customers were more cautious on interacting with the public, a conscious move which inadvertently hurt local businesses throughout the country.

“I started doing some research on ways to make those connections, and what I discovered was although there had been a large number of record shows in the D.C. area, there hadn’t been one in over 18 months,” Mulvihill said.

The lack of a connection between music lovers during COVID-19 inspired Mulvuhill to organize and fund LtM entirely by himself, with the added encouragement from other record store owners. Other Maryland record shows such as the Baltimore Record Bazaar and the Arbutus Record Show also inspired Mulvihill to come up with his own local approach. 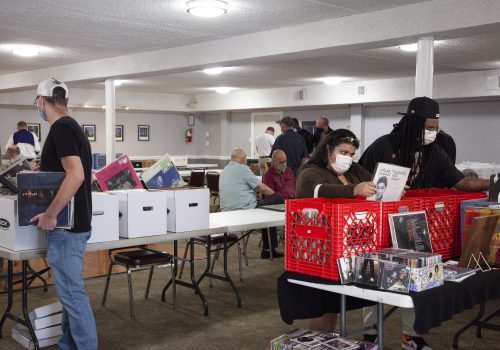 Some of the challenges of hosting the event included renting out the facility, advertising, and getting enough dealers. A lot of the event’s potential rests on its ability to cultivate a large number of customers, especially when comparing the younger and older demographics of record listeners. If there isn’t a lot to buy, then the dealers won’t be coming in the future.

Sonidos! Music & More in Beltsville was one of several vendors that offered records at LtM. Owner Claudia Mendiola-Durán described the difficulties her store experienced along with many others during the pandemic. Sonidos! first opened in October of 2019, just months before COVID-19 massively spread throughout the United States.

“A young lady reached out to me to do a story on [the store]… and social media just blew up for us at that time,” Mendiola-Durán said while describing the initial popularity the store had experienced in February of 2020 before it was shut down. “Ever since we reopened… we’ve basically just [been] trying to recapture that momentum that we had initially.”

Lily Tyndall found out about LtM through an ad on Facebook, and described how finding a record is different from hearing it on the radio or listening to it through streaming platforms like Spotify. Older used records are typically sought after, as they may come with unique additions such as promotional inserts — think posters, cards and stickers — and liner notes.

“It just has a story,” Tyndall said. “Somebody was so excited to go buy that [album] when it originally came out, and they held onto it all this time, and then it [comes] to you.”

Mulvihill was happy to see people of all ages buying records from multiple vendors. LtM succeeded in uniting many different music lovers under one roof, and the many sales conducted during that day proved that vinyl never really went away, as consumers can support both their favorite artists and local vendors on an older yet more prevalent medium.

The Love the Music Record Show occurs bimonthly with its next event scheduled on December 4, plus more dates planned for 2022.

MCFRS Respond to Smoke at Trader Joe’s in...