CVS will close its location at the Twinbrook Center (2210 Veirs Mill Rd. in Rockville), according to signage posted inside the store (photo below sent in by Tom Carlson). The store’s closing date is August 29th. The store initially opened back in 1957 as a Drug Fair before becoming a  People’s Drug, the company purchased by CVS back in 1990, decades later.

Late last year CVS announced that it would be closing approximately 900 stores over the next 3 years due to “changes in population, consumer buying patterns and future health needs.” A CVS location on Veirs Mill Rd. closed last November. However, new CVS locations in MoCo were planned for Clarksburg (across the outlets, already opened), Westside at Shady Grove,  and Gaithersburg (Kentlands).

While there is no word on a potential replacement for the CVS at the Twinbrook Center, many nearby residents are hoping for a similar store with a pharmacy to take its place. Featured photo courtesy of Google Maps. 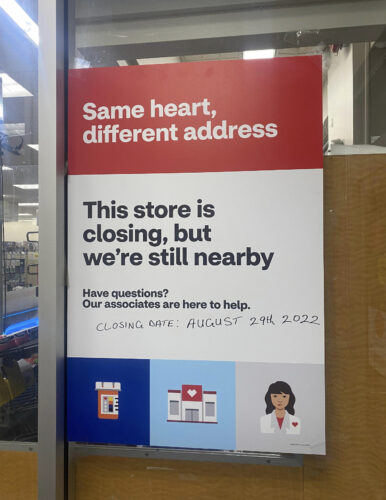 Actually it started as Drug Fair in 1957. Their was a Peoples across the street for many years that closed. Then when the Drug Fair closed as well, it briefly became. Peoples in the 80s only before becoming CVS.

There is already one across from outlets in Clarksburg ….Know the facts before writing an article.

Thank you, Mr. M. We’ve posted photos of its grand opening on our social media and are aware it is open.

The article DID state that the location across from the outlets us already open.