The office of District of Columbia Attorney General Karl A. Racine has announced that he will hold a press conference at noon on Thursday, November 10th to “make a major announcement regarding the Washington Commanders.” This news comes one week after team owners Dan and Tanya Snyder announced they hired Bank of America Securities to explore options surrounding selling the team.

As of now, no additional information regarding the announcement has been provided. The media release by Attorney General Racine can be seen below: 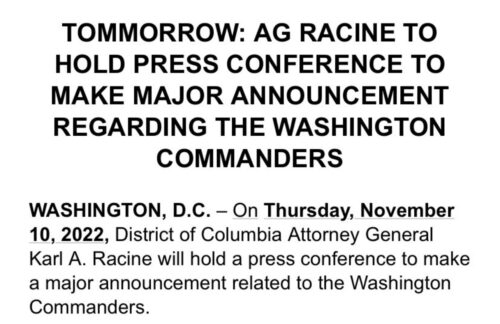 Germantown Man Arrested and Charged with Capital One Bank Robbery

“Odometer Rollback on the Rise” in the DMV,...