Update: Finnegan’s Wake has reopened. “We are back and HEALTHY! Thank you for your patience while we tested our staff to ensure everyones safety. We will be open today(Wednesday) for our normal hours.”

Finnegan’s Wake has announced a temporary closure via its social media, for the safety of staff and patrons

In a message via social media, owner Vanessa Laurin told us, “Due to multiple staff members being sick we felt it necessary to take precautions. Our staff is small and our customers are very important to us. We want to keep everyone healthy. We will reopen shortly as soon as everyone is 100%.”

The Irish Pub features traditional Irish cuisine and bar food, as well as a vast menu of alcoholic beverages.

The pub opened in mid-2016 at 100-F Gibbs Street, the former location of Carbon Peruvian Chicken and is owned by Terry and Vanessa Laurin.

“The Laurins, who live in North Bethesda, have years of experience in the restaurant industry. Vanessa Laurin is a former manager at Fado Irish Pub in Washington, D.C. and the two met while working at Montgomery’s Grille in Bethesda in 2000.” according to a 2016 Bethesda Beat article.

Finnegan’s Wake let’s patrons know that updates will be provided via its social media pages. 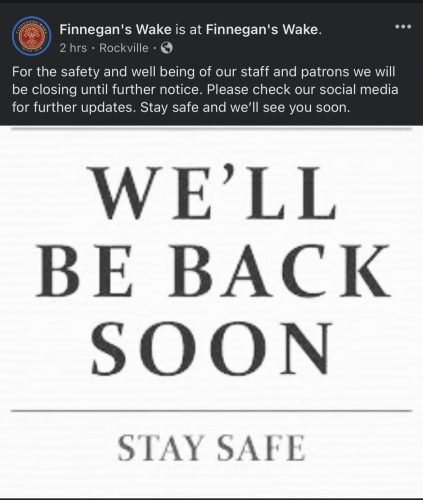 Body Recovered at Pond in Rockville