The Kensington Volunteer Fire Department (KVFD) is hosting a Remembrance Ceremony to mark the 20th Anniversary of 9/11. The Remembrance will take place on Saturday, September 11, at the KVFD’s 9/11 Memorial.

The KVFD’s 9/11 Memorial features artifact metal from the World Trade Center, as well as a piece of the damaged limestone façade of the Pentagon. The Memorial is located next to KVFD Station 705, at 10620 Connecticut Avenue in Old Town Kensington.

The Wheaton Volunteer Rescue Squad Color Guard and the Montgomery County Firefighter Pipes and Drums will also be at the Remembrance, presenting the colors and closing out the event.

This Saturday’s Remembrance will also be streamed online. For those attending in person, parking is available at several locations in Kensington. 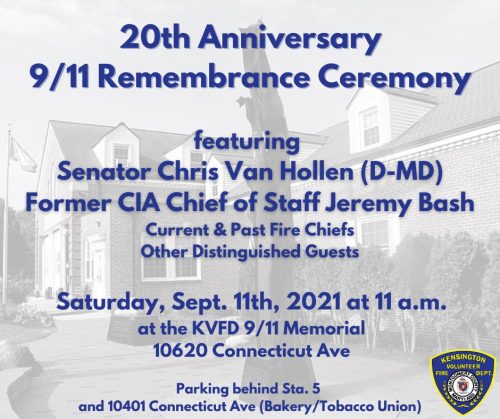 Progress at BabyCat Brewery in Kensington; Aiming for...

Virtual Hearing on the Proposed Abandonment of Right-of-Way...