Kevin Plank, founder of Under Armour, grew up in Kensington. He is the youngest of five brothers born to William and Jayne Plank. His father was a prominent real estate developer who passed away in 1993. A local project of his was the Al Marah subdivision off River Road, just off of exit 39 on the Beltway.  His mother was the mayor of Kensington for 8 years, from 1974-1982. She went on to direct the Office of Legislative and Intergovernmental Affairs at the United States Department of State under President Ronald Reagan, and was a real estate broker until the early 2000s.

Plank grew up playing youth football with the Maplewood Sports Association. He even featured a Maplewood team in an Under Armour commercial. 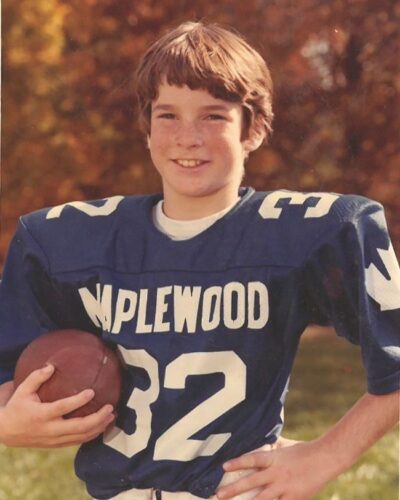 Kevin Plank during his Maplewood days in Montgomery County

While growing up in Kensington, Plank has mentioned that one of his favorite places to eat was Continental– a family owned and operated restaurant that has been serving the Kensington community since 1957. Plank attended Georgetown Preparatory School, but left the school due to poor academic performance and behavioral issues. According to Forbes, he was thrown out of private high school after failing two classes and for his part in what Forbes described as a “drunken brawl” with football players from Georgetown University.

He went on to graduate from another Catholic school, St. John’s College High School, in 1990. While at St. John’s, Plank first met his future wife, Desiree Jacqueline “D.J.” Guerzon of Potomac, when he went out with one of her classmates from the Holton-Arms School in Bethesda. The future couple even went to prom in the same car, but with different dates. Their paths crossed again at the University of Maryland where they began dating and eventually married.

After graduating from St. John’s, Plank played football at Fork Union Military Academy for a year, in an attempt to catch the eye of  a NCAA Division I school. He was not recruited by  any top-tier collegiate football programs, but decided to attend the University of Maryland (College Park), where he was able to walk on to the football team there. He graduated in 1996 with a bachelor’s degree in business administration from the Robert H. Smith School of Business, which he supports to this day with major contributions.

The idea that led to Under Armour was sparked while playing for the Maryland Terrapins; Plank said he was the “sweatiest guy on the football field” in an interview with Fortune. The cotton t-shirts he was wearing were unable to keep him dry and comfortable, so he searched for a material that would wick the sweat from his body, so after graduating he searched for synthetic materials that would keep athletes dry. While at University of Maryland, Plank launched Cupid’s Valentine, a seasonal business selling roses on Valentine’s Day. Cupid’s Valentine earned him $3,000.  He used that money, credit cards, and a Small Business Administration loan, to launch his business– trying several prototypes before deciding on the one he wanted to use.

Plank originally wanted to call his new sportswear company ‘Heart.’ He was unable to trademark the name, so he went with ‘Body Armor’, which he was also unable to trademark. It wasn’t until his brother asked him “How’s that company you’re working on … Under Armor?” that the name he ended up using stuck. Why did he use the British spelling if the word “Armour”?  He came up with a phone number, 888-4ARMOUR, that the felt was more compelling than using 888-44ARMOR, according to Business Insider.

Plank initially ran the business from his grandmother’s townhouse in Georgetown. According to The Washington Post, Under Armour began in Plank’s grandmother’s house on the corner of 35th and O Street in Georgetown in Washington, D.C. He lived upstairs, had the sales office on the ground floor, and kept all the inventory in the basement. Under Armour’s first shirt was the #0037, which Plank sold from his car.

He also asked his former teammates to try on the shirts, claiming that his alternative to a cottons-shirt would enhance their performance on the field. He would send his friends who went on to play professionally shirts so that they can pass them on to teammates. His first big team sale was to Georgia Tech. In 1996, Plank finished his first year selling shirts with $17,000 in sales, per the Baltimore Business Journal.

A turning point for him came late in 1999, when Plank used nearly all of Under Armour’s money, and employees agreed to go without pay for a few weeks, so the company could take out a $25,000 advertisement in ESPN The Magazine.  The ad resulted in $1 million in direct sales for the following year, and athletes and teams began buying the product, according to The Washington Post. Plank’s company reached $1 billion annual revenue for the first time in 2010, and Plank became a billionaire in 2011, when his net worth was estimated at $1.05 billion. Plank currently has an estimated net worth of $1.5 billion.

As CEO, Plank oversaw a company that generated $5 billion in annual revenue and employed about 15,800 people as of December 31, 2017. Plank announced his departure as CEO in October 2019, and was succeeded on January 1, 2020, by Under Armour COO Patrik Frisk. Under Armour edged out Adidas to come in #2 behind Nike with U.S. apparel and footwear sales of $1.2 billion (Adidas came in at $1.1 billion) after a 20% increase in sales compared to a 23% decrease by Adidas according to a Sterne Agee report Friday citing sales figures from SportScanInfo in September of 2021.

A Few Good Men…One of Them From MoCo

Superb feature on a great success story. We love him here in Potomac.