Royal Farms has opened, Wawa is on the way, and many have been waiting for the trifecta to be complete with the Sheetz announcement. Good news for the lovers of the convenience store/gast station, as Sheetz, Inc., has submitted Final Site Plan application, SP-9217-2022, requesting approval for a 6,139 square foot convenience retail store with drive-through and automobile filling station at 751 Progress Way, located off of N. Frederick Rd (355) in Gaithersburg.

The City of Gaithersburg’s Planning Commission will conduct a Public Hearing for an Amendment to the Schematic Development Plan for the second office building at Washingtonian South and review a Final Site Plan for a Sheetz convenience store and filling station at 700 N. Frederick Ave. at their regular meeting this evening, Wednesday, August 3rd according to City Councilmember Ryan Spiegel who confirmed the agenda. Below is a rendering of the upcoming Sheetz location and our featured photo shows what it will look like once completed. 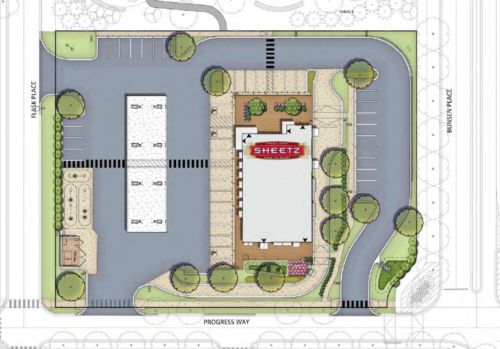 More on Sheetz: Bob Sheetz founded Sheetz, Inc. in 1952 when he purchased one of his father’s five dairy stores located in Altoona, Pennsylvania. In 1961, Bob hired his brother Steve to work part-time at the store. It was not until 1963 that the second store was opened under the name “Sheetz Kwik Shopper.” It took another five years to open the third store. In 1969, Steve joined Bob in the business as general manager. The brothers planned to expand at the rate of one store per year with a target of seven stores by 1972. In 1972, the brothers literally doubled the size of the company, expanding from seven to fourteen stores. One year later, Sheetz added gasoline pumps and introduced self-serve gasoline to Central Pennsylvania.

By 1983, Bob and Steve had opened 100 stores. The following year, Bob retired and handed over the leadership of the company to his trusted business partner and brother Steve. In 1995, Stan Sheetz, Bob’s son, became president and Steve assumed the position of Chairman of the Board. Stan lead the company through new periods of growth and innovation. Introducing Sheetz fans to touchscreen ordering, Sheetz Bros. Coffeez, Made-To-Go and Shweetz Bakery products, while redefining the concept of getting quality food at a convenience store.

Continuing the successful transition of family leadership, Joe S. Sheetz (son of Bob’s brother Joe M.) became president and CEO in October 2013. Stan moved on to the role of Chairman of the Board. Looking to ensure the unique family connection with the business well into the future, Steve assumed the position of Chairman of the Sheetz Family council.

I use Sheetz everywhere. Wish it was closer to Bethesda. Get rid of Shell.