The First Toys R Us Ever Was In…Rockville.

Charles P. Lazarus is the D.C. native that founded the company now known as Toys R Us. In 1948 he opened a baby furniture store named Children’s Bargain Town. Two years later, in 1950, he introduced a few select toys to his inventory. It didn’t take long for him to realize that toys, unlike furniture, either broke or fell out of favor with kids rather quickly…so he added a lot more toys and cut back on the furniture.

In 1957 he used the supermarket model of being able to walk around with a cart and shop for whatever caught one’s eye in his first Toys R Us location…on 355 in Rockville, MD. The original location was a little further north on the Pike than the Mid-Pike plaza location a lot of folks remember, located where Mi Rancho and Chesapeake Seafood House used to be near the current location of Party City.

Toys R Us then moved to Mid-Pike Plaza and later moved to the far left side of the plaza as you face it until the location closed after the 2013 holiday season. Toys R Us officially shut down all U.S. locations on June 29th, 2019 after 70 years of operations.

Personal Note: I used to hate going into Kids R Us in Rockville knowing that Toys R Us was just on the other side of the wall. 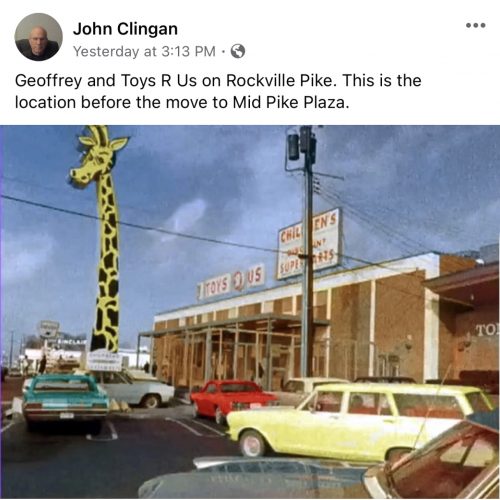 That store was called Children’s Supermarket when we used to go there in the 50s. We moved in ‘59 and when we returned in 66, it was Toys R Us. My brother and I loved that place in the 50s.