MoCo History: What Is That Building in the Woods on Clopper Road in Germantown? It’s Clopper’s Mill

If you’ve ever driven on Clopper Rd near Waring Station Rd in Germantown, you’ve likely seen the ruins of a building in the woods. That building is Clopper’s Mill, named for Francis C. Clopper, also the road’s namesake.

Per the The Maryland-National Capital Park and Planning Commission:

Francis C. Clopper operated a mill on Great Seneca Creek. He expanded the existing stone mill in 1834 with bricks made at his Woodlands estate. The original mill dated from 1795, and a mill had been on site as early as the 1770s. Clopper’s Mill, now in ruins, stands near Clopper and Waring Station Roads.

In 1784, Zachariah Maccubbin (MacKubbin) agreed to buy “Good Port,” as it was then known, from William Benson. Maccubbin failed to pay for the property so Benson had him dispossessed by ejectment. While Maccubbin had position, he tore down the decayed Benson’s mill on Good Port and built a new mill.

An Act to open “a road not exceeding thirty feet wide, from Barnsville to Zachariah Maccubbin’s Mill, and thence to intersect the Main Road leading from Frederick-Town (Frederick) to George-Town (Georgetown) at or near Log-Town (now Gaithersburg)” was passed Jan 25, 1806 by the General Assembly of Maryland. It is believed that this may be the current Barnesville Rd to Clopper Rd to West Diamond Ave, intersecting Rt. 355. In the Maryland Chancery Papers Index, there is mention of an injunction against Zachariah Maccubbin to keep him from removing timber from Good Port.

In 1812, Francis C. Clopper purchased Benson’s estate including the fairly new mill, which was built by Maccubbin sometime after 1784. Clopper rebuilt the mill in 1834. It was a grist mill and saw mill that was originally driven by an overshot wheel, but later converted to an undershot wheel. The mill was destroyed by fire in 1947 by an arsonist. 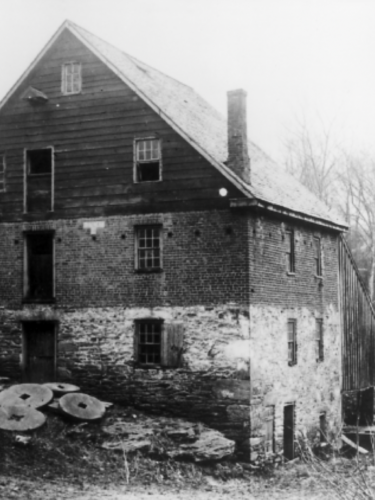 Do you have in kids size