Sidney Hechinger opened his first hardware store in Washington D.C. in 1919. In 1953, the company had grown to five stores. Sidney brought in his son, John Hechinger, and his son-in-law, Richard England, as partners. By the early 70s, the company had doubled in size to ten stores. Hechinger and England took the company public in 1972.

John Hechinger Jr. became was named president of the company in 1986. He was the third generation of Hechingers to run the show and reincorporated the company in Delaware the next year. At the time, the company was up to just over 50 stores. By 1995, there were 131 stores in the mid-Atlantic region of the United States. That’s when the competition from Home Depot and Lowe’s forced Hechinger to close almost twenty stores, while reformatting a few others. It was the first major decrease in stores the company had ever seen.

The Hechinger company was bought by Leonard Green and Partners in 1997 for $100.2 million. Two years later, in June 1999, they filed for Chapter 11 bankruptcy and by September of that year, every store was closed and assets were liquidated. The Hechinger name briefly came back in 2004 after Home Decor Products purchased it to use as an online tool retailer. That lasted 5 years until the site shut down in 2009.

There were MoCo stores in Glenmont, Gaithersburg, near Wheaton Plaza, near Montgomery Mall, and Rockville (possibly more). Here is what the Rockville store looked like shortly after opening in 1957, courtesy of the Jewish Historical Society of Greater Washington. 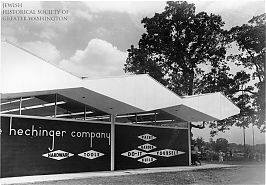 ‘Drinking Water in the DC Area: Past, Present...

History of the Town of Barnesville, Which Recently...

‘The Nurse and the Midwife: The Story of...

‘Preserving Historic Cemeteries’ Will Be Focus of Montgomery...

I shopped at the DC store as well as Bethesda, Rockville and the Wheaton area. Loved the stores much better than the Orange one.