The lights are off, doors are locked, and phones are ringing unanswered at Taylor Gourmet in Pike & Rose. Google lists the restaurant as “permanently closed” and employees at two DC locations confirmed the closing.

Taylor Gourmet returned to Pike & Rose in October of 2019, a little over a year after the brand announced it would be closing all 17 of its stores in the DC area.

In April of 2019, it was announced that new ownership would be reviving the local sandwich chain, bringing back some of the more profitable locations.

We were told in July of 2019 that Pike & Rose would be one of the locations that would be returning, along with Penn Ave and DuPont Circle in DC. The Pike & Rose restaurant reopened in October of 2019 in the same location it was previously in.

After a little over two years, the restaurant has closed. 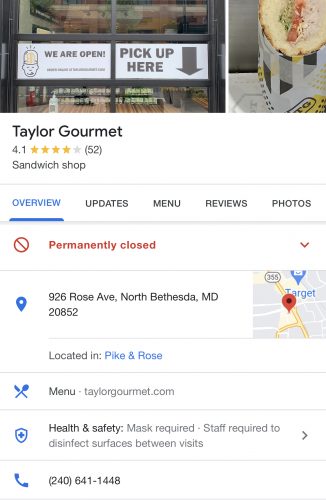 Planta, An Upscale Plant-Based Restaurant, To Open Next...