Buffalo Wings and Beer has closed in the Cloverly Village Center  (15412 New Hamphire Ave), according to employees of the restaurant who told us the restaurant closed on January 4th.

Earlier this month, signage was placed on the window stating the restaurant was closed temporarily due to a staffing shortage, but the pool tables and juke boxes were removed from the restaurant. Google now lists the restaurant as permanently closed.

Buffalo Wings and Beer was founded and created in 1995 by the late Ira Levy, a Silver Spring native who was able to grow the local chain to 10 restaurants across the DMV at one point. The first restaurant opened in Gaithersburg after Levy saw a restaurant go out of business on Snouffer School Road, near the old Gentleman Jim’s location.

The eventual expansion included locations in Cloverly, Baltimore, Eldersburg, Frederick, Germantown, Glen Burnie, Hagerstown, and Leesburg, VA among others, even becoming a sponsor of the Washington Football Team for a few years.

A highlight for the local restaurant chain was winning the National Buffalo Wing Festival that is held every year in Buffalo, NY. Buffalo Wings and Beer was first selected to compete in 2008, earned a 2nd place finish in 2009, and won the competition of over 185 restaurants in 2010.

The Cloverly location was the last remaining of the restaurants. 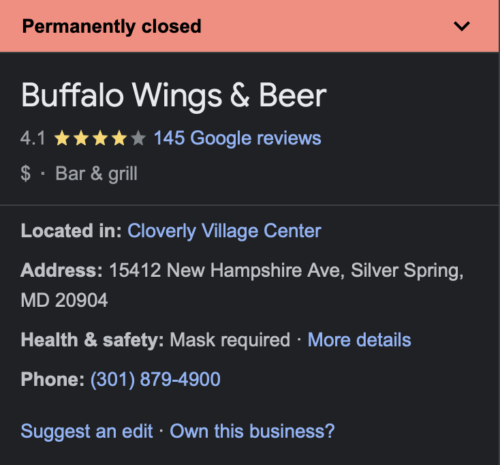 Update on The Fairland and Briggs Chaney Master...

Seibel’s In Burtonsville Purchased by Owners of Chapala

The food was good. The service was terrible. Many (not all) of the waitresses were rude and quick to ban people. It was also the whitest place on earth. I hope something better comes along in that location