Charleys Cheesesteaks & Wings is now open at 405 N Frederick Ave, in the location that was recently home to Teriyaki Express. The new Charleys restaurant is located in the shopping center anchored by Megamart and FedEx Office. We’re told there are no plans at this time to close the nearby Lakeforest location.

Charley’s now has over 600 stores nationwide. Newer locations have adopted a new menu concept, offering chicken wings and ice cream in addition to its Philly cheesesteaks. “Tossed-to-order, the wings are made with 10 chef-inspired flavors ranging from Angry Ghost and Nashville Hot to milder options like Zesty Lemon-Lime Rub and Sweet Teriyaki.” 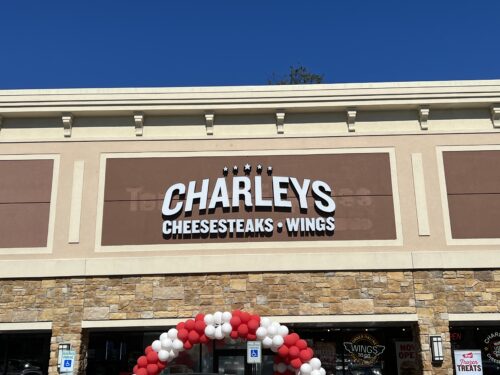 Charley’s Cheesesteaks and Wings is also coming to 19877 Century Blvd in Germantown sometime in 2023. It will be taking over the location that was previously home to Roll by Goodyear and Yogi Castle in the Shops at Town Center & Century Station shopping center. We also reported earlier this month that Charleys Cheesesteaks will be opening a location inside of the Germantown Walmart (20910 Frederick Rd), in the space formerly occupied by McDonald’s.