The award, which recognizes not only outstanding athletic excellence, but also high standards of academic achievement and exemplary character demonstrated on and off the field, distinguishes Robinson as Maryland’s best high school football player.

The 6-foot-4, 242-pound senior defensive end and linebacker recorded nine tackles, two tackles for loss and 1.5 sacks, leading the Cougars to a 2-0 record during this past pandemic-shortened season. A First Team All-State selection as a junior, Robinson was also a Washington Post All-Met First Team honoree, amassing 85 tackles, 14 sacks and three forced fumbles in 2019. He was selected a 2020-21 Under Armour All-American and is ranked as the nation’s No. 21 recruit in the Class of 2021 by 247Sports.
Robinson has served as a mentor for younger players and has volunteered his time assisting at a variety of athletic events at his school.

“You would have trouble finding a player more dominant than Demeioun Robinson in the Class of 2021,” said Tyler Bierly, head coach at Gaithersburg High. “He’s just a great player and has been an integral part of the success Quince Orchard has had the last few seasons.”

Robinson has maintained a B average in the classroom. He has signed a National Letter of Intent to play football on scholarship at the University of Maryland this fall.

The selection process is administered by the Gatorade Player of the Year Selection Committee, which works with top sport-specific experts and a media advisory board of accomplished, veteran prep sports journalists to determine the state winners in each sport.

Through Gatorade’s cause marketing platform “Play it Forward,” Robinson has the opportunity to award a $1,000 grant to a local or national youth sports organization of their choosing. Robinson is also eligible to submit a 30-second video explaining why the organization they chose is deserving of one of twelve $10,000 spotlight grants, which will be announced throughout the year. To date, Gatorade Player of the Year winners’ grants have totaled more than $2.7 million across 1,117 organizations.

Since the program’s inception in 1985, Gatorade Player of the Year award recipients have won hundreds of professional and college championships, and many have also turned into pillars in their communities, becoming coaches, business owners and educators. 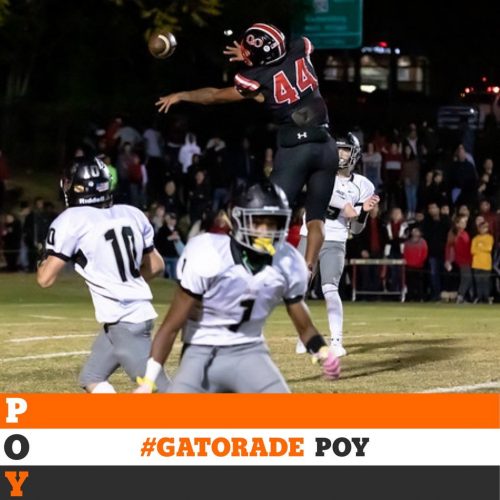