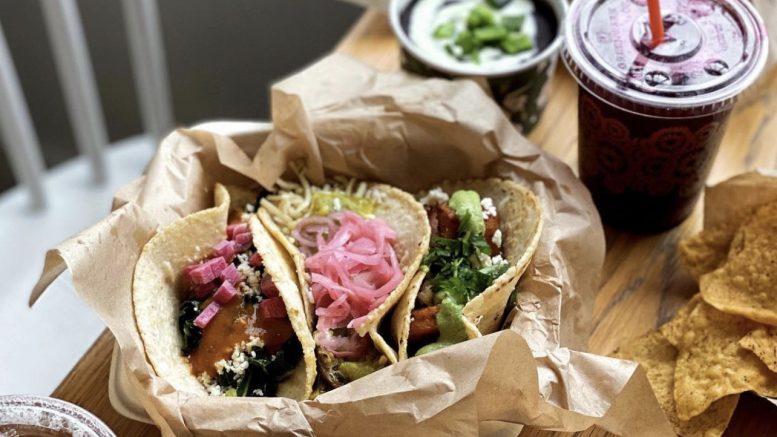 Chaia Tacos, which has two locations in Washington, DC, announced in July that it will be opening a pop-up shop at 7237 Woodmont Avenue in Bethesda, the former site of Häagen-Dazs.

Last night we were told the restaurant will be opening on Tuesday, September 28th.

A few of the taco varieties they serve include braised mushroom, kale & potato, roasted eggplant, and chipotle sweet potato hash.  The menu does not feature Impossible/Beyond style meat substitutes.

The food will be prepared at their Chinatown location and then brought to the Bethesda restaurant.

BizJournals reports that the restaurant will seat 20 people indoors and 12 outside, offer a window for low-contact ordering and pick up. It will be open 11 a.m. to 8 p.m. Tuesday through Saturday and 11 a.m. to 5 p.m. Sunday, closed Monday.

From chaiatacos.com:
Founded by Bettina Stern and Suzanne Simon, Chaia is a female led, female run business that believes everything’s better in a taco and making the world a better place starts with the food we eat. From a stand at the Washington D.C. farmer’s market to our first Georgetown spot, Chaia is expanding in the nation’s capitol and beyond.

The Eleanor is Set to Reopen April 1st

Chadol Korean BBQ is Coming to Research Row in Rockville

Be the first to comment on "Taco Tuesday: Chaia Vegetarian Tacos to Open on Tuesday, September 28th"