The Cider Barrel to Reopen This Spring

UPDATE: Due to Covid, the reopening has been delayed. No new date currently, but renovations have already started.

Back in 2017 a local pastry chef attempted to raise money to bring back The Cider Barrel. Her efforts fell short and the barrel remained unusual on the side of 355.

A new Facebook page by the Germantown Historical  Society, The Cider Barrel Revival, has announced that the historic landmark will re-open this spring.

As of now, details are unclear, but we are certainly excited! Here’s some history of the historic Cider Barrel.

The Cider Barrel in Germantown opened in the mid-1920s and sold non-alcoholic cider from the Ballincar Orchard in Germantown during the height of Prohibition.

The 12 foot tall barrel is located on the side of North Frederick Rd. in Germantown (Rt. 355) and Oxbridge Drive, next to The Elms apartment complex.

After 77 years of selling what a lot refer to as the best apple cider they’ve ever had, apples, pumpkins, and more, The Cider Barrel closed in 2003. Owner, Bill Cross, sold the property because operations became too stressful for the 86 year old gentleman and his business partner.

In 2009 there were talks of moving the Barrel to a location in the Germantown Town Center, but it never occurred because there was a chance the handmade structure would not survive the move.

In 2012, the Germantown Historical Society had the Cider Barrel added to the Maryland Historic Trust’s Most Endangered Historic Places List, which has saved it from being moved or destroyed. 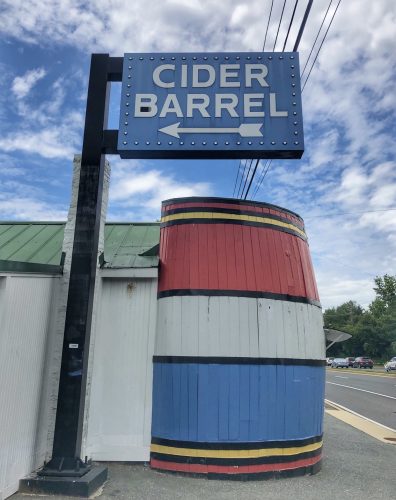 Yay! That will be wonderful (not to mention delicious)!

How stupid to open this as any kind of business. Where will patrons park? The same goes for unloading trucks. It is literally located within feet of Rt 355. Leave it as is. A historical monument.

How can it hurt to sell some cider from there? Assuming the cider is as good as before. The cost of it can be measured against the possible increase in well-being it provides in today’s troubled world. This is not measurable in dollars and cents, but not every good is denominated in USD. On the other hand, a roadside monument to the things we don’t have any more may be worse than nothing.

Furthermore, if care was taken to set up a pre-payment model, which would be web-based, cars would just have to quickly drop in and pick up their order. No time consuming making change and handling money. When I visited here in the past, did not observe a parking problem. You have to be alert anyway, all along 355, to avoid accidents.

This ment so much for the community when it was functional. It would be a great to see this in the community again! It has more than enough consumers within the vicinity for it to succeed. Not to mention the street parking alongside as well as the parking area near the food trucks!! I cant wait!

Brad Martin- the permits for building behind the Cider Barrel required parking be provided. Not sure how MoCo let them get away with no parking, but supposedly there are spaces in the lot above….not that anyone would use them.

I, too, have big questions about the parking issue. Assuming there’s a solution I can’t begin to imagine, I’m thrilled to think Cider Barrel is reopening and plan to be a regular customer.

Let’s hope they can obtain the same recipe for the cider as was sold in years past.

Went there alot back in the 60s when I was a kid. Glad to hear of the reopening!

So happy to see!!!! please keep me informed. Thanks!! MJ

Best cider ever. Was sad when it closed, ecstatic that it’s opening again. Screw the naysaying trolls.

Thank you who ever saved it. I was a faithful customer and will again be there to enjoy the barrow!!!!!!

Thank you for reopening the Cider Barrow

Looking forward to the opening. I will definitely stop by.

This ment so much for the community when it was functional. It would be a great to see this in the community again! It has more than enough consumers within the vicinity for it to succeed. Not to mention the street parking alongside as well as the parking area near the food trucks!! I cant wait!

Haven’t had any decent cider since they closed!

My family lived down the street in a trailer at Oakrest trailer park, in the ’50s. It was a highly popular attraction, and served great cider. I’m pleased to know that it is being preserved.

So happy about this! Can’t wait. As a child it was a special treat to stop there, especially on the way home from the fair.

Went there alot back in the 60s when I was a kid. Glad to hear of the reopening!

“The building is owned by a development company that owns the apartment complex that sits above it.”

“Now a local woman has signed a lease to reopen the Cider Barrel and once again sell fresh, locally made cider and local produce. Plans are to be open weekends and operate much like a farmers market with different local farmers rotating through each weekend.”

“They hope to be open for business this spring.”

“While the cider sold will be locally made, it won’t be the original recipe. The original owner never revealed it.”

Looking forward to the Reopening of Cider Barrel, wonderful childhood memories in the 70s-80s ?

There is really no “recipe” for cider. It is just the unfiltered pressed juice of the apples—nothing more, nothing less. Any “recipe” for it would be, maybe, a selection of what variety of apples to use. Since it is unfiltered, it has a short shelf life and is sold fresh. Real fresh cider is thick and turns brown in the container due to oxidation, just as a cut apple does, and will be available only in the fall during the apple season. Anything else is just apple juice.
There are several orchards all throughout the county. They produce many varieties of apples and peaches and there is fresh apple cider sold at many locations, in season. If it is outside of Fall, it is not from local fresh pressed apples.

When we moved here in the mid 80s RT 355 was still two lanes somewhere around the Cider Barrel and the major portion of what you see now was not there. This was two lane roads, corn fields, old houses, streams that did not run through concrete, and there were dense wooded hills. RT 355 was a small, still fairly rural, road . There were no culverts alongside the roadway and you could simply pull aside the road and buy some apple cider. There was not anywhere near the population density that there is now. It was mostly all undeveloped land. This area has exploded with houses and shopping centers and traffic! It was all farm land and woods, until it wasn’t.
Then the road was widened and all of the mega suburbs were built and everything changed.
Now, it is not possible to stop alongside the road at that location. Unless the owners of the apartments (who also appear to be the ones who own the CB) behind are willing to give up parking spaces, there is still no where to stop anywhere near there. Perhaps the owners will have to get the county to rearrange the situation and restructure the curbs. That seems to be problematic on so many levels, given that 355 is now a major traffic artery with multiple lanes of traffic of speeds of 40-50 MPH.
No idea who owns that paved property south of there that is mentioned as a parking area, but it is quite a ways from the CB. It might give some added traffic to the food trucks that park there.
It would be lovely to have a local icon once again in operation. But, the reality is that so much has changed and it can never go back. Since the context of where it is located has changed, why not change the location of it ? A more useful solution would be to move it to somewhere like the Germantown park and use it as some type of museum or as the center focus for a local apple festival. it would be more relevant to the local history than the ill fated Germantown Octoberfest is. It is the CB, itself, and the abundant apple and peach orchards of the country that are to be recognized and celebrated. The location of the CB is almost not relevant to that and it is certainly in a most inconvenient and awkward and potentially dangerous place along the modern roadway. . Also, in the face of the new Vision Zero implementation on the part of MOCO it seems that pedestrian safety would have to be addressed as it would be a place of business that can only be accessed via the walkways. It would, no doubt, draw quite a lot of interest and pedestrian traffic to a tiny place alongside a busy thoroughfare.
Meantime, there are many wonderful orchards all around the county where you can buy all manner of local produce and abundant apples, in season. How nice it would be to center a local festival around that and to have that iconic structure as a central focus for it.