Warren was found hanging from a tree on July 31, 1986 near his home in Silver Spring. The death was classified as a suicide but because of inconsistencies in the case, his family has long believed it to be a lynching.

From Wikipedia:
“Many argue that the intricacy of the rope ties were too complicated to perform by one person. To add to the confusion, it was also stated that police did not determine a perimeter or close off the scene, they never interviewed his acquaintances, and an autopsy was never performed. His body was sent directly to a funeral home for embalming, even before his mother, Mary Couey, was notified of that decision.[4] Warren’s mother and sister, Sherri, believed the death to be a lynching. They were able to review the files with Montgomery police detective Joe Mudano.[5] He was also found in clothing and shoes that were not his own.[6]

The case was featured on an episode of Unsolved Mysteries in 1996.  The portion on Keith Warren begins at the 32 minute mark.

I am writing to request that you order an independent investigation into the Montgomery
County Police Department’s handling of Keith Warren’s death. Mr. Warren was a young black
man found hanging from a tree in a wooded area near his home in Silver Spring in 1986.

An independent investigation should examine whether there is cause to re-classify Mr.
Warren’s cause of death from “suicide” to “unknown.” His family has found many troubling
inconsistencies in this case, which linger today despite previous reviews. We must dispel any
questions about our County government’s handling of this incident.

We may or may not be able to find out the true cause of death, but I strongly believe that
there is more uncertainty about the situation than is recognized by the County’s official position
and that the treatment of Mr. Warren and his family has been unfair and unreasonable. I have
talked with Mr. Warren’s sister, Sherri Warren. She has been fighting for decades, along with her
now deceased mother, to bring justice for her brother’s memory. She deserves our support and
recognition of Keith Warren’s humanity. An independent review to determine whether the cause
of death is actually “unknown” would provide that. 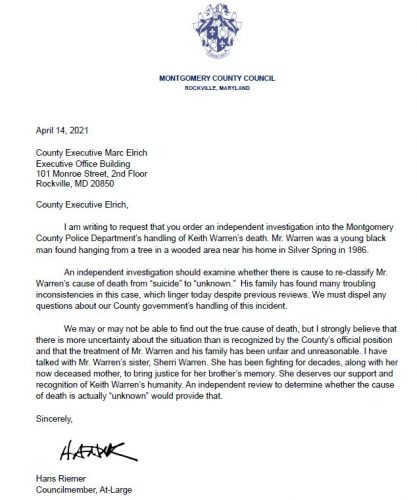 Mr. Han Reimer is the first person from the county outside of Mr. Lipp to come forward and support my efforts to get my bothers death reclassified and the death certificate changed which my mom fought for for 23yrs until her death. Due to Det. Beasley not ordering an autopsy, cutting the tree down, he lost the noose, and using information from a 3rd party unknown, unrelated and undocumented source to classify my brother’s death as a suicide; we will never know how Keith got on the tree. I can say for certain he did not put himself on the tree with information based medical and scientific documentation.

I just saw your brothers case on unsolved mysteries and felt compelled to look it up. Sending love and light to you and prayers for your beautiful mom and brother who deserves justice. I hope you get answers.