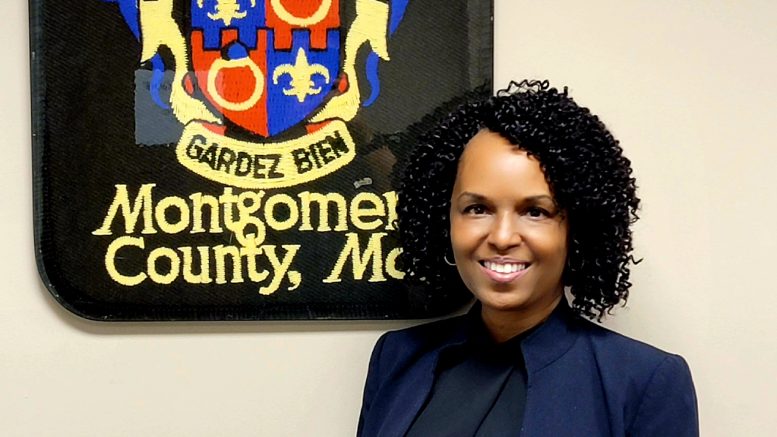 Montgomery County Police Chief Marcus Jones is pleased to announce the hiring of Shiera Goff as the Montgomery County Police Department’s Director of Public Information.
Shiera D. Goff, a media professional with an extensive background in broadcasting, public and media relations and crisis communications, started her position with MCPD on May 10.
Goff comes to Maryland from Amherst, Massachusetts where she worked with the University of Massachusetts Amherst as the Associate Director of News and Media Relations. Prior to moving to Western Mass., she served as the Public Information Officer with the DeKalb County Police Department and the Office of Communications for the Chief Executive Officer of DeKalb County in Georgia.
Before moving to Georgia, she lived in Rochester, N.Y., and served under three mayors in the City Hall Bureau of Communications as the Communications Producer. She managed a team of videographers, editors and still photographers, and she produced, hosted and voiced television programs, commercials and public service announcements for City12 TV.
Goff began her career as News Director and morning show co-host at 103.9 WDKX-FM, helping to make it the top-rated morning radio show in the market. She also worked as a news reporter with the ABC News affiliate in Rochester.
A native of Rochester, N.Y., she was raised in Holliston, Mass., and graduated from the State University of New York at Brockport with a B.S. in communications and history minor.
Goff is the daughter of a retired Rochester Police Officer and a passionate Patriots fan. She is excited to be back in policing.

Slice of Rockville Closing This Friday

Daily Grill in Bethesda Will Not Reopen