Last week we reported on the Montgomery County man, Jeremy Duffie, who claimed the world record top prize at The White Marlin Open. The total winnings have increased and Duffie, along with Sandy Spring’s Bill Britt, have claimed over $5.7 million in prize money. The White Marlin Open is a 48-year-old deep-sea fishing tournament held annually in Ocean City, Maryland.  The tournament awards prize money for catches of white marlin, blue marlin, tuna, wahoo, dolphin and swordfish. This year, a Bethesda resident, Jeremy Duffie, caught a white marlin and claimed the billfish tournament’s top prize., which is a world record payout. Duffie, fishing off Ocean City boat Billfisher, reeled in a 77.5-pound white marlin and claimed $4.536 million prize. Sandy Spring’s Bill Britt (seen in photo below) received a $1.208 Million payout for reeling in a 511 pound blue marlin. 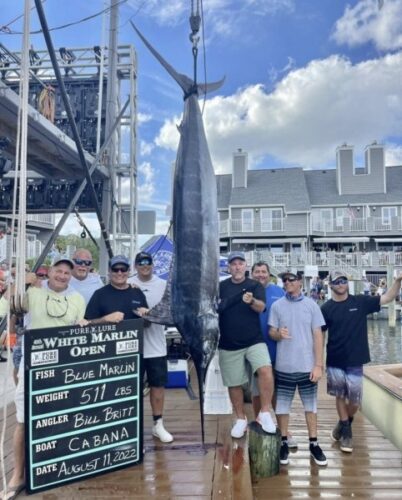 About The White Marlin Open: The first tournament, held in 1974, drew 57 boats, 150 anglers and paid $20,000 in prize money with the top award of $5,000.  The 2021 event drew 444 boats, over 3,500 contestants, and paid out over $9.2 million dollars in prize money including the top individual awards of $3.2 million. Long known as “World’s Largest Billfishing Tournament,” the White Marlin Open has awarded over $86 million dollars since 1974 to the lucky winners among more than 110,000 anglers aboard over 15,000 registered boats.  Along the way, the WMO became not just the largest billfish tournament, but also holds the world record for prize money payouts for any type of fishing tournament.

It is fitting that the “World’s Largest and Richest Billfish Tournament” is held in Ocean City, Maryland, “The White Marlin Capital of the World.” In 1939, President Franklin Roosevelt, after a great day of marlin fishing out of the newly formed Ocean City Inlet, bestowed that title to Ocean City, Maryland.  To this day, no better white marlin fishing can be found, and Ocean City vacationers provide a fan-following unique to sportfishing tournaments anywhere.  Thousands of spectators’ flock to the inlet in the pre-dawn hours to cheer for the boats large and small as they head out to sea in search of gamefish worth their weight in gold.  Thousands more gather at Harbour Island to view the weigh-ins each afternoon during “Tournament Week” to cheer as fortunes change hands with the tip of a scale.  This adds a whole new dimension for anglers as one explained:  “Pulling up to the scale with a big fish and thousands of cheering fans felt like being in the Super Bowl.  It was a thrill of a lifetime.”  Founded and directed by the Motsko family, this symbiotic relationship of great billfishing, excited and knowledgeable fans and the chance to win millions of dollars has lured boats and anglers from around the world to fish “The Big One.”

In addition to the lottery-sized prize money awards, a major reason for the tournament’s popularity is the format that allows each boat to enter the tournament based on their pocketbook, perceived skill level, and targeted species.  Anglers may register their boat to fish the White Marlin Open for as little $1,500 to compete for the $50,000 in guaranteed prize money or as much as $63,000 to enter all the added entry levels with the chance to win millions of dollars.  While the largest awards generally go to the billfish categories, tuna fisherman can also cash in by entering specific tuna added entry levels where winnings for the tuna category can exceed a million dollars.  If your team is only interested in catching and releasing billfish, the Release Division awards to the top 3 boats has exceeded $100,00.   Smaller boats, under 40 feet, may compete against the whole fleet or enter the categories that are limited to boats under 40 feet.  In effect, the White Marlin Open contains multiple tournaments under its umbrella, and that formula has helped the tournament outdraw all other billfish tournaments every year for the past 4 decades.

As the name states, the White Marlin Open is open to all anglers.  While the Open attracts some very skilled billfishermen, the format helps level the playing field and novice anglers have also won millions while fishing the tournament including the 2016 top winner who caught his first ever white marlin and netted $1.6 million dollars for his catch.  We have no age restrictions and young anglers have also fared well while fishing the Open including one teenager who won the top white award and one who took the top blue marlin money.

When measured by both the amount of prize money and the number of participants, the White Marlin Open is not just the “World’s Largest and Richest Billfishing Tournament,” it is arguably the “World’s Largest and Richest Fishing Tournament” of any kind.  The 49th Annual White Marlin Open will be held August 8-12, 2022 and we project the payout will exceed over $10 million dollars.  Whether as a spectator or as a contestant, we hope you can be a part of the special excitement that swirls throughout Ocean City during “Tournament Week.”

MCPD Update on Friday Night Shooting in Montgomery Village; No Suspect in Custody At This Time

Pedestrian Struck by Vehicle in Bethesda; Driver Did...