The Wells Fargo at 9812 Falls Road in Potomac was robbed for a second time in three weeks yesterday, May 3rd.

Police received a call shortly after noon on Monday saying that a male had entered the store and obtained money.

The first robbery occurred back on April 14th.

It’s unclear at this time if the two robberies are connected. No arrests have been made at this time.

Bethesda Beat was the first to confirm this story. MCP will provide additional information as it is confirmed.

Thanks to all the readers that sent in photos yesterday of the scene. 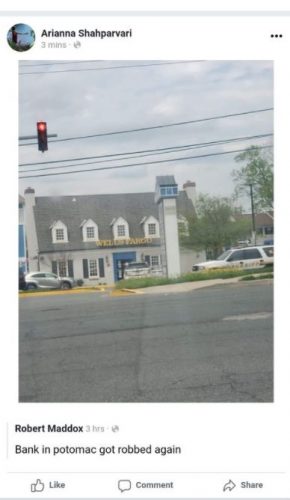 Two Suspects Charged with Stealing Over $10,000 Worth of Merchandise from Three Home Depot Stores