Using area codes was second nature before cell phones made it easy enough to call someone with the tap of a finger, but for the first 15 years of my life I dialed 7-digits to make a local call.

Area code 301 covered the entire state of Maryland when it was established in 1947. It wasn’t until October of 1991 that 410 was brought into play for Baltimore and the Eastern Shore. Usually the largest city in the area (Baltimore) maintains the original area code, but in our case the D.C. suburbs kept 301. Howard County was split between 301 and 410.

Just a few years after the initial Maryland split, we began to run out of 301 numbers. On June 1st, 1997, 240 was introduced as an overlay area code. This was met with a bit of resistance because it meant we had to dial 10 digits for local calls instead of the 7 everyone was used to. There were talks of the new overlay area code being put into use in Frederick and points west, but Bell Atlantic thought it was unfair to force those customers to change their numbers so they introduced 240 throughout the area.

We are now getting close to running out of 301/240 numbers, so it’s possible that 227 is introduced as a new area code within the next 5 years.

DC will soon run out of new telephone numbers to assign to their current area code of 202 and will start assigning a new area code this month.

Fun MoCo Memory…
Phone numbers from certain areas started with the same 3 digits, so you only had to remember the last 4. Please forgive me if any of these are incorrect, but here are a few:

​Image below courtesy of Wikipedia 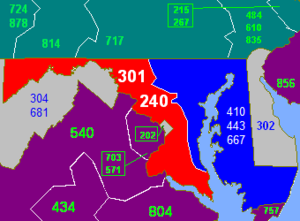 Sam Eig: “Mr. Montgomery County” and The Man Behind The Name

Rocket Launch Will Be Visible (Weather Permitting) on...

I can remember my family’s phone number started with “white hall” (’60s)in Rockville. It was later changed to 770 in the ’70s.