Beyond MoCo Update: Suspect in DC Shootings Has Been Located Deceased

This article is being updated with as MPD provides updates

The Washington DC Metropolitan Police Department (MPD) tweeted at 3:47pm that it was “responding to the 4100 block of Connecticut Avenue, NW for the report of at least 2 shooting victims (it ha snow been confirmed that there are 4 victims). There is a large police presence in the area. Updates will follow.”

In a 4:18 PM Update, MPD stated that “the location of this incident is 2900 block of Van Ness Street, NW. Police are in the area conducting active sweeps.” MPD has asked residents in the Cleveland Park and Van Ness to shelter in place.

In a 4:27 pm update, MPD has stated that there have been at least 3 victims located (two adult males and one juvenile female). They ask again for everyone continue to avoid the area and shelter in place if in the area.

at 5:28pm, MPD tweeted that “there is an established Family Reunification Site located at 3310 Connecticut Ave, NW, (Cleveland Park Library). If you are looking to find a family member/child, please go to this location and speak with officials from MPD and assisting DC government agencies.” 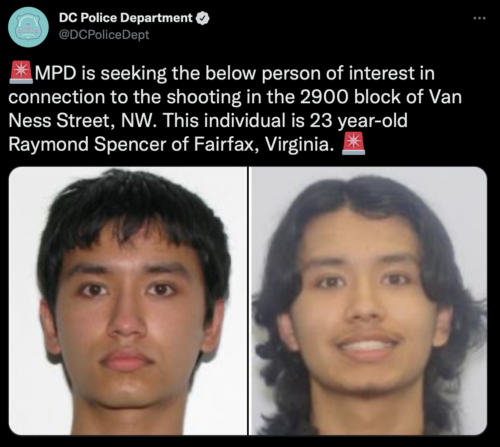 7:54 pm Update: There are 4 total victims in this shooting incident. 2 adult females, 1 adult male, and a juvenile (12 year-old) female. The additional adult female victim is in her 60’s and suffered a graze wound to the back.

9:47pm Update: “The suspect has been located deceased inside of a residence in the area of Conn Ave and Van Ness St, NW.

The shelter in place has now ended.

Arrest Made in Relation to Thursday’s Bomb Threat...