Former United States President Donald Trump released a statement today endorsing Dan Cox for Maryland Governor. Cox is a Republican politician who represents district 4 in the Maryland House of Delegates. He made waves earlier this year when he referred to former Vice President Mike Pence a “traitor” during the 2021 United States Capitol Attack. In the statement, Trump goes after current Maryland Governor Larry Hogan and Republican gubernatorial candidate Kelly Schulz, who currently serves as the Secretary of the Maryland Department of Commerce. Schulz announced in April that she would seek the Republican nomination for Governor of Maryland in 2022. Trump’s full statement can be seen below:

“Dan Cox is an America First Patriot who is running for Governor in the Great State of Maryland. A tough lawyer, and smart businessman, Dan has done outstanding work in the Maryland General Assembly. Dan is MAGA all the way-unlike his opponent, Kelly Schultz, who was handpicked by her “boss,” RINO

Larry Hogan, who has been terrible for our Country and is against the America First Movement.

As a State Delegate, Dan stood up to Hogan when he was supporting and meeting with Joe Biden. Dan is for low taxes, school choice, and no more lockdowns.

He supports our Military, our great Vets, our Second Amendment, which is under attack like never before, and importantly, is very strong on Election Inte grity.

He fought against the Rigged Presidential Election every step of the way, and will bring secure Elections back to Maryland. Dan Cox has my Complete and Total Endorsement!”

Governor Hogan, who is not eligible to run for re-election and is rumored to be preparing for a presidential campaign in 2024, provided a short response via Twitter:

Personally, I'd prefer endorsements from people who didn’t lose Maryland by 33 points.

“Kelly Schulz’s life experience, credentials, and record of accomplishment make her uniquely qualified to lead this state. She is proud to have stood next to Governor Hogan over the last 8 years as they fought to make Maryland a better, safer, and more affordable place to live and raise a family. Don’t be fooled – Kelly Schulz is the only Republican who can win this race and the only person running who has the strength and ability to prevent the Maryland legislature from passing any law and tax they wish.” 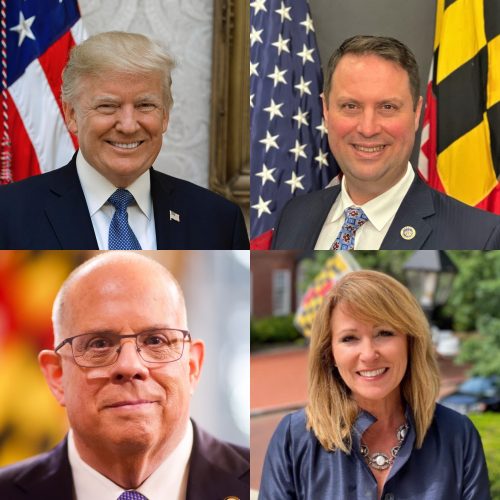 State of Maryland Surpassess 88% of Adults, 99.9% of Seniors Vaccinated

Beyond MoCo: Governor Moore and U.S. Department of...

“States Should Be Able to Enact Laws Restricting...

Governor Moore’s Statement on the Killing of Tyre...