President Donald Trump tweeted a report from Breitbart News that states Maryland Governor Larry Hogan paid for flawed COVID tests from South Korea back in April. In the tweet, he referred to the Maryland governor as a RINO, which stands for “Republican in name only.”

Governor Hogan quoted the President’s tweet and responded with

“If you had done your job, America’s governors wouldn’t have been forced to fend for themselves to find tests in the middle of a pandemic, as we successfully did in Maryland.

On Friday, the Washington Post reported that the first batch of COVID tests Hogan purchased from South Korea for $9.46 million were flawed and unused. In the report the Post also claimed that “the Hogan administration quietly paid the same South Korean company $2.5 million for 500,000 replacement tests.” 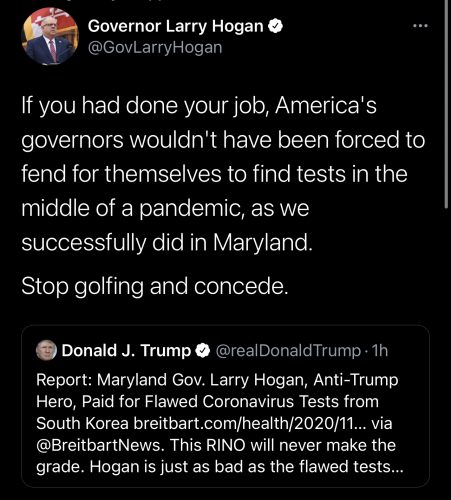 Hogan Is the best republican I know.

Sure he is. Voted for a dead president, and spent millions of taxpayer money on trash Covid tests from Korea because that’s where his wife is from. Gg.

Be that as it may, at least Governor Hogan tried to get test kits for his citizens. I’m sure when he placed the order for the kits, he wasn’t intentionally buying flawed kits. Stuff happens. But he tried. Which is more that I can say for Cadet Bone Spurs….

People can say what they want about our Gov. Hogan but , there’s no confusion as too the fact that as a republican, one of them will be re-elected and the other won’t. 🎤