Montgomery County will take another step in the revitalization of Downtown Wheaton at 7 p.m. on Friday July 9, as it dedicates its new public gathering and entertainment space that will be known as “Marian Fryer Town Plaza.” County Executive Marc Elrich, County Council President Tom Hucker and Councilmember Nancy Navarro will be among those leading the dedication ceremonies.

The ceremonies will be followed by a concert from the legendary band “The Nighthawks.” The concert will kick off the renewal of the Wheaton “TGIF Summer Concert Series.” 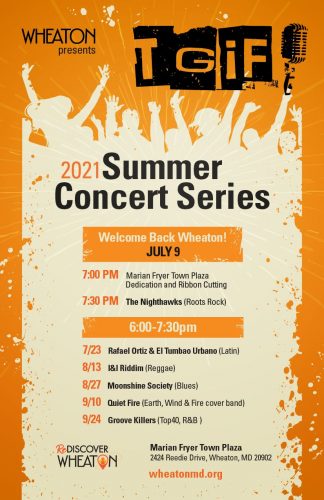 The elected officials will join family members and friends of Marian Fryer, a longtime Wheaton resident and community activist who passed away in 2017 at age 79. The ceremonies will include the unveiling of a plaque for Ms. Fryer and a ribbon cutting.

Jim Epstein chair of the Wheaton Urban District Advisory Committee, will serve as MC of the event. Suzan Jenkins, CEO of Arts and Humanities Council of Montgomery County, will speak about the new art piece it commissioned for the plaza.

The Montgomery County Guest (MCGuest) free Wi-Fi service is available around the plaza.

The first major achievement of the Wheaton Revitalization Project was the dedication in October of the 14-story County-built office building in the middle of what is known as the Wheaton Triangle Business District. The 308,000 square-foot office building is the new headquarters of the Maryland-National Capital Park and Planning Commission.

The building, which will include ground floor retail, is surrounded by Reedie Drive, Grandview Avenue and Triangle Lane. The plaza is along Reedie Drive across from the building’s main entrance and near the entrance to the Wheaton Metro Station.

Ms. Fryer was a resident of Wheaton for more than 45 years, She worked as an administrative officer with several agencies of the Washington, D.C. and Federal governments for more than 34 years. In 1996, she started her home-based business, Marian’s Connections, a consignment boutique specializing in new and pre-owned clothing and accessories for women.

“I knew Marian Fryer well and had great respect for her,” said County Executive Elrich. “She was tireless and she was truly committed to the Wheaton community. She was an outspoken advocate on behalf of the community and she always spoke her mind. It is fitting that her name will be in the center of Wheaton because Wheaton was always center in her efforts. We are all fortunate to have had her in our lives.”

One Montgomery Green in 2018 named its community service award after her. A strong advocate for the arts, she was instrumental in assisting with the County’s application to the Maryland State Arts Council for Wheaton to be designated as an Arts and Entertainment District.

Councilmember Navarro said: “Marian Fryer served as a tireless advocate for her community, and as the unofficial Mayor of Wheaton she deserves this recognition. This community space will now be the first thing many will see when they visit Wheaton, and I am proud that it is Marian Fryer’s name that will be greeting everyone. She was a champion for this redevelopment project and her invaluable advocacy will forever be implanted in Wheaton’s civic memory and urban life.”