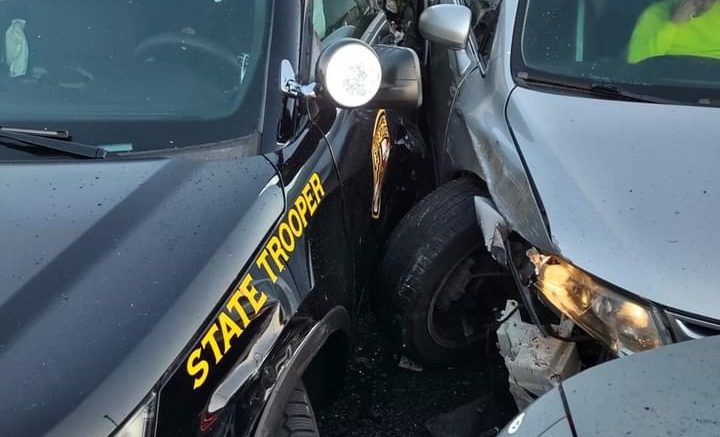 (ROCKVILLE, MD) – A Maryland state trooper was struck while conducting a traffic stop on southbound I-270 early this morning in Montgomery County.

The trooper is identified as Trooper Brian DeHaven. He is assigned to Rockville Barrack.  Trooper DeHaven was transported to Suburban Hospital for the treatment of his injuries sustained in the crash.

The vehicle involved in the crash is a 2012 Toyota Venza.  The driver of the Toyota is identified as Jose Ascencio, 44, of Germantown.  Ascencio was uninjured during the incident. Charges are pending the outcome of the investigation.

At 6:10 a.m. this morning, Trooper DeHaven was struck by a Toyota Venza while he was outside of his patrol vehicle on the left shoulder of I-270 south at Exit 6, Route 28/West Montgomery Avenue in Rockville. The trooper was conducting a traffic stop on a 2019 Kia passenger car.

The trooper’s marked Ford Explorer was parked behind the Kia with its emergency lights activated on the left shoulder of the highway. The trooper was outside of his patrol vehicle conducting the traffic stop. He was standing in between the jersey wall and the driver’s side of the Kia when the Toyota Venza swerved and struck both the trooper and the two parked vehicles.

Emergency medical service personnel responded. Trooper DeHaven was transported by ambulance to Suburban Hospital for his injuries.  The drivers of both the Kia and Toyota were uninjured during the incident.