The annual Taste of Bethesda Festival scheduled for October 2, for the second year in a row, will not be taking place due to the recent resurgence of COVID-19 cases.

Traditionally the festival features live entertainment as the community strolls the streets filled with local vendors from nearby restaurants. Previous evens have attracted over 45,000 individuals.

Smaller-scale activities, such as live music at The Streetery and “yappy hour,” will continue in Bethesda.

Last year the Bethesda urban partnership replaced the event with an 11 day restaurant promotion event where Downtown Bethesda offered fixed-priced menus. Currently, there is no word on a replacement to take place.

The announcement was first reported byDan Schere from Bethesda Magazine. 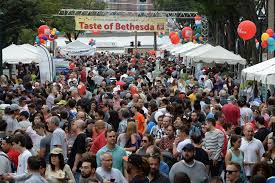 Overturned Tractor Trailer on Outer Loop of I-495