A 16-year-old and a 21-year-old are dead after a shooting that occurred Wednesday, May 11 in Germantown. Montgomery County Police responded to reports of a shooting on the 19600 block of Crystal Rock Drive around 4:10pm.

No information regarding suspects or a motive has been released. This is an active homicide investigation and Montgomery County Police are expected to release more information today. Crystal Rock Drive was closed for several hours after the incident occurred between Route 118 and Middlebrook Road as part of the investigation. 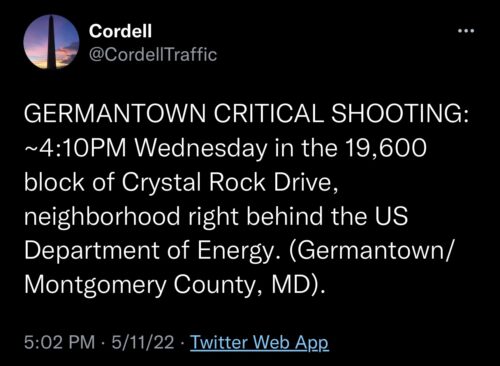 TRAFFIC ADVISORY : Crystal Rock Drive is closed between Route 118 and Middlebrook Road as the result of a police investigation. Drivers are advised to seek an alternate route. Expect significant delays. #mcpnews pic.twitter.com/yGtjyl9C0X