Two people were found dead by Montgomery County Police around 9am this morning in a parking lot located in the 18900 block of Highstream Drive in the Manchester Farm neighborhood of Germantown.

MCPD found the victims after responding to a call for shots fired in the area.

Information regarding the victims has not yet been released.

Manchester Farm Community Association released the following statement to its residents this afternoon: 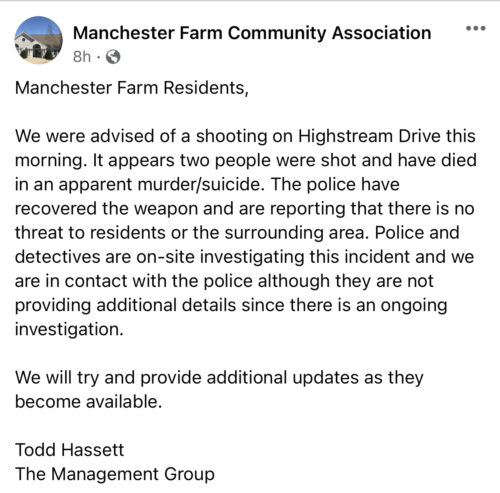 We were advised of a shooting on Highstream Drive this morning. It appears two people were shot and have died in an apparent murder/suicide.

The police have recovered the weapon and are reporting that there is no threat to residents or the surrounding area. Police and detectives are on-site investigating this incident and we are in contact with the police although they are not providing additional details since there is an ongoing investigation.

We will try and provide additional updates as they become available.

Montgomery County Police are investigating a shooting in the 18900 block of Highstream Drive. #mcpnews pic.twitter.com/PIpAdYyY7C