85% Of Montgomery County’s Total Population is Fully Vaccinated, Per the CDC

893,213 people in Montgomery County are now fully vaccinated, which is 85% of the total population, according to CDC data (1,050,929 residents have received at least one dose). 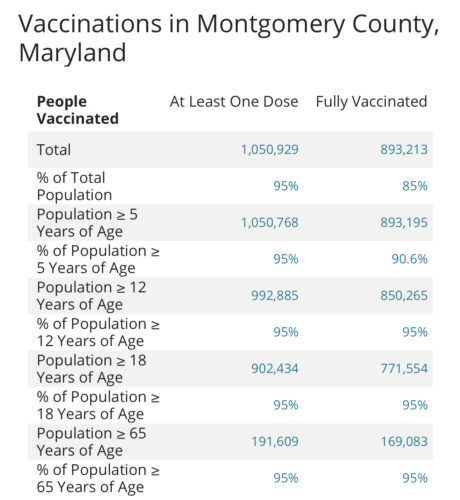 As of now, the regulation is scheduled to end on January 31 at 11:59pm, meaning masks will be required until at least that date. The County Council will meet on January 24th to determine whether or not to extend the regulation again.

Yesterday, the County Council held a public hearing and discussion on the resolution that would require restaurants, bars, fitness centers and other establishments to require customers to provide proof of vaccination against COVID-19 before entering indoor areas, as proposed by County Executive Elrich.

During the meeting, Council President Gabe Albornoz announced there will now be another public hearing next Tuesday, saying that the Council wants to be “methodical and thoughtful about this process because obviously this order has a lot of consequence to it.” The vote is now tentatively scheduled for next week’s meeting.

Joint Statement by the Montgomery County Executive and...

Panel Discussion on the State of Rental Housing...