Back in December of 2019, we learned that Frank Pepe’s would be opening its first Maryland pizzeria right here in MoCo.

After many delays we have learned that the restaurant is back on track to open, as they currently have a hearing to sell beer and wine scheduled for 10am on September 2nd.

Frank Pepe’s will be located in the old Bobby’s Burger Palace location on the lower level across from Cheesecake Factory. No opening timeframe has been provided yet, but we will relay the information as soon as it’s available.

Per its website, Frank Pepe originated the New Haven-style thin crust pizza which he baked in bread ovens fired by coke. Coke is a byproduct of coal and it was used extensively until the late 1960’s when it became unavailable and hence coal was then put into use to fire the oven. 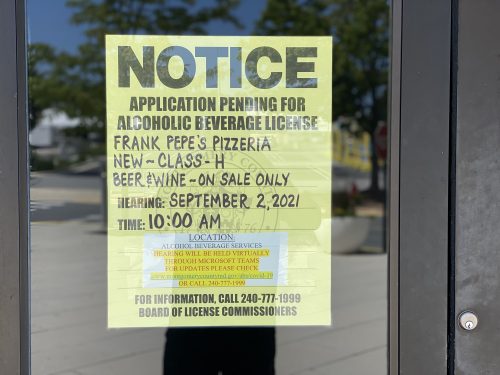 Mario Lopez to Host In-Person ‘Home for the...

Pepe’s is not a “new england area” pizzeria, it is a new haven, ct pizzeria. CT is in the NY/NJ/CT tri-state area and it has nothing to do with Boston and Boston is mot local to any part of CT.

It’s New-Haven style pizza that has many locations in the New England area (what the publications are most likely referring to).