Today the Montgomery County Council, acting as the Board of Health, approved an Amended Board of Health Regulation to prevent the spread of COVID19 in the county.

The new regulation will reinstate the mask mandate after seven straight days of “substantial transmission”, which is 50 or above cases per 100,000 residents.

The mask mandate would go back into effect on Tuesday, November 9.  As of Tuesday, there have been five consecutive days where the case rate has been above 50. The seventh consecutive day would technically be November 5, but there is a four-day grace period to allow numbers to be confirmed with CDC data.

The council also unanimously approved an amendment suggested by Councilmember Andrew Friedson that would terminate the mask mandate altogether after the county hits a vaccination rate of 85% of total population (according to data tracker on CDC website).

Council Vice President Gabe Albornoz said that vaccination is the key to moving past mask mandates. 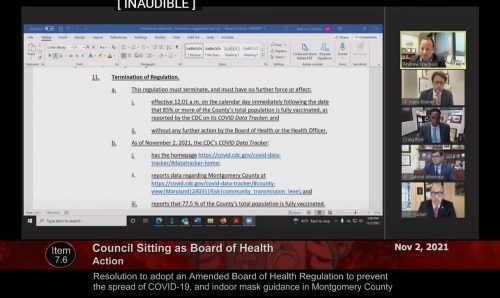 Additional Details on the Amended Board of Health Regulation

Ride On to Provide Shuttle Service for Juneteenth...